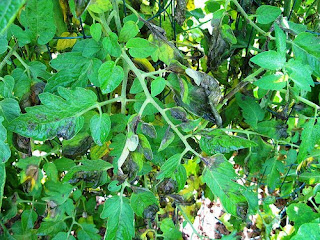 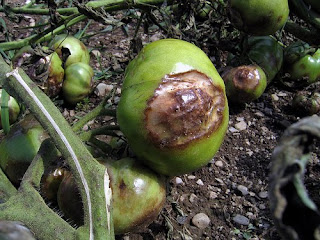 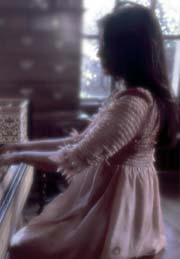 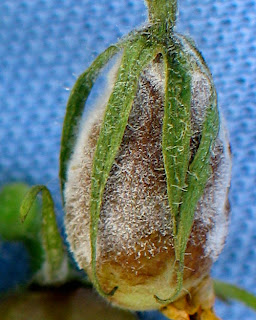 A REMEMBRANCE OF TOMATOES PAST

In his sonnets, when Shakespeare summoned "up remembrance of things past," he longed for "the lack of many a thing I sought." (30). He was speaking of the Dark Lady, the elusive paramour he swore was "fair" and "bright," yet was "black as hell, and dark as night" (147).

Such has been the sorry tale of many tomato paramours with anticipations of luscious, full-fleshed, lip-locked ecstasies right off the vine but who instead got the cankered mold of late summer blight. Just as Shakespeare was "frantic-mad" and "past cure" (147), the tomato paramour, too, grieves for those tomatoes once sought, turned "black as hell" and "dark as night." However, there are lessons to be learned. In today's limited lexicon, Shakespeare had the "hots" which often produce undesired consequences, such as "buzz off," "yuck," or the Black Lady's, "not you" (145).

After lavishing their tomatoes with love and affection, care and tender-mercies, tomato paramours may suffer betrayal, caused by their hots for "too much of a good thing, such as, commercial, synthetic fertilizer with too much nitrogen. The result is luscious foliage, miraculously grown with little or no fruit, a passion unconsummated. As they say, read the label, with its three dead giveaway letters.

They are N-P-K: N for nitrogen, P for phosphorus, and K for potassium. The best ratios for tomatoes are 5-10-5, 5-20-20, or 8-16-16 with nitrogen the lowest. The reason is simple: nitrogen stimulates the growth of the plant, phosphorous the production of fruit, and potassium overall plant health. Ironically, much of commercial synthetic fertilizer is counter-productive to tomato plants because it's nitrogen heavy.

The best fertilizer is compost which isn't primarily a fertilizer. Paradoxically, synthetic fertilizer doesn't do any good and may even do harm if the soil isn't chock full of mychorizzae. They are fungal facilitators clinging to plants' roots which enable the roots to take up nutrients from the soil. Compost is a source of and stimulates the development of mychorizzae as well as providing natural nutrients.

Long before tomatoes are planted, the soil should be prepared with lots of compost and organic fertilizers. They need nutrient and organically rich soil before being planted, as well as, being watered regularly and deeply.

The cankered mold of late summer blight which has swept the East
and Middle West is best fought by preparation. Three years should pass before using the same soil, or the soil should be sterilized. The fungus, Phytophthora infestans, a water mold, may remain in the soil from years past. It's been studied as a tool in biological warfare.

The easiest way to sterilize the soil is to put it in a black container enshrouded in a black plastic bag and let it sit in the sun cooking for several weeks. Safe soil is more easily controlled in containers. Finally, plant premium seeds because they don't carry the fungal spores which are carried by air and ground on fruit and plants. The fungal spores that caused the blight in East and Middle West were probably carried on plants from the South.

Since late summer blight occurs chiefly in hot, humid climates, it isn't "a clear and present danger" in Flagstaff, save sometimes during the monsoon, by humidification from overhead watering, or importation. Tomatoes like dry leaves and regularly well-drained wet roots. In addition to clean soil as a bulwark against soil borne fungal attacks, tomato plants should be widely spaced so that air can circulate freely to ward off air borne infestations.

A frequent complaint, in addition to lack of fruit, is blossom end rot, an affliction aptly named, because dark spots of rot slowly consume the tomato at its blossom end. No lip-lock fruit. More like yuck. The culprit is a lack of calcium as the fruit sets caused by too much nitrogen and uneven watering. The remedy: throw away the fruit and deep water.

Painful are the remembrances of tomatoes past which were "lov'd not wisely, but too well" (Othello, V, 2, 344). Growing tomatoes from seeds in clean soil, compost, and balanced organic fertilizer, with regular, well-drained deep watering are the ways to love tomatoes well and wisely.