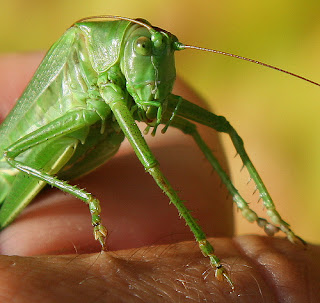 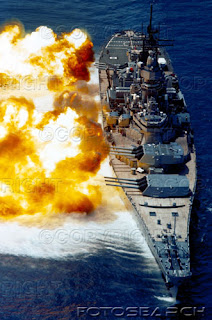 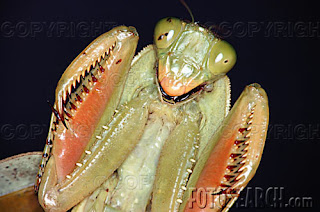 Robert Benchley, the great humorist of two generations pervious and grandfather of Peter Benchley of Jaws fame, while leaving the Algonquin Hotel in New York City, asked a uniformed man at the curb to hail a taxicab for him. The uniformed man replied, “I’m sorry, but I’m an Admiral in the United States Navy.” Benchley replied, “O, that’s all right, then get me a battleship.”

I learned more about human anatomy reading his parody, “Through the Alimentary Canal with Gun and Camera,” than any textbook I ever read.

In a grasshopper invasion, gardeners often feel the need of a battleship such as the U.S.S. Iowa with its 18 inch rifles ablaze. The problem is “collateral damage,” a military euphemism for killing of innocent people. Rather than big guns, grasshoppers are better fought with cunning by defeating them with their weaknesses.

Akin to a blitzkrieg, a lightning war, an invasion of grasshoppers can only be fought with counter-terrorist tactics. In war the difference between strategy and tactics is the difference between a plan of action and the means by which that plan is executed. With an inexhaustible reservoir of grasshoppers annihilation isn’t possible. A pre-emptive strike won’t work because they’re everywhere.

The strategy is to cripple and reduce them to ineffectiveness with a series of tactics both repeated and diverse, a comprehensive defense well in place before the attacks begin.

The first line of defense is a lethal series of traps. A fixed line of defense, such as the French Maginot Line in World War II, won’t work because the grasshoppers will pull an end-run, just as the Germans did in 1941. In a mobile defense, the traps are placed where grasshoppers are likely to attack, such as those bare undisturbed spots where the pods of eggs are buried, especially in the garden’s perimeter.

NoLo, short for Nosema locustae, isn’t a poison, but a disease which favors grasshoppers and isn’t a threat to anyone else, such as children, pets, and birds. Sevin is the commercial name for the pesticide carbaryl. While there have been no reports of human deaths from carbaryl, it’s still a poison and must be used carefully as with any deadly weapon. As a recipient of friendly fire years ago, I urge caution since carbaryl is lethal to a gardener’s allies, honey bees, parasitic wasps, birds, and lady bugs.

If carbaryl is sprayed as a big gun, collateral damage will result so it’s best used instead with wheat bran. Happily, carbaryl disintegrates rapidly, loosing its lethal potency, but this means repeated use.

The traps are best laid in barren spots and amongst tall grasses where our allies won’t suffer collateral damage and far away from bird feeders and plants attractive to honey bees. An in-depth defense for those grasshoppers who make it through the perimeter defense are tin cans with both ends cut out, partially sunk in the soil, placed in the middle of the garden with the bait placed inside the can.

Older and more developed grasshoppers will take longer to die than the nymphs. They will become lethargic, jumping about as though drunk, easy target for their cannibalistic kindred.

Since grasshoppers never stop, NoLo and Sevin should be applied regularly from early spring to late autumn. Happily, NoLo has a residual effect and may carryover from year to year, gradually building up a lethal arsenal, even afflicting the egg-laden pods.

The next line of defense is airborne, such as squadrons of birds and praying mantis. Several bird feeders throughout the yard help to develop a resident corps of birds ready to attack from the air. Pods of praying mantis eggs purchased from commercial nurseries can be hung in trees. When hatched they favor grasshoppers. Turkeys and other domesticated fowl, if allowed by local government, devour grasshoppers with gusto.

When spotted, the only response is that of Admiral William F. “Bull” Halsey, Jr., of World War II fame. “Strike, Repeat Strike.” 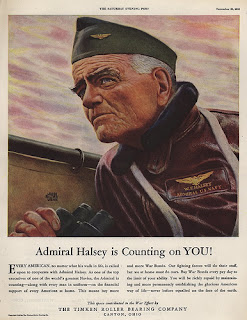 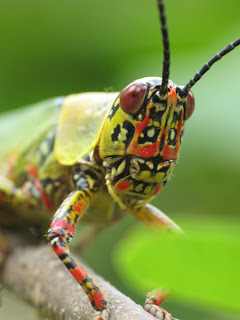 An attractive, bright-eyed, well-dressed woman stood beside her car’s trunk handing out plastic baggies filled with an unidentified substance. A stream of customers forked over greenbacks. In the cushy environs of University Heights, the scene had the furtive quality of customers buying illegal herbal substances from a shady entrepreneur on the mean streets of Phoenix. The woman was actually passing out baggies full of wheat bran laced with NoLo, a grasshopper bait. As I approached her, I asked her if she were “the grasshopper lady.” She stiffened and politely replied, “Yes, I’ve got the NoLo you asked about.”

When I told meine Überfrau about it, she said, “Well, just what would you expect? How would you like ‘the manure man’?” “No big deal,” I replied. "D.P., you're really clueless."

Jean Hockman, the woman in question, is head honcho of Flagstaff’s Garden Club, a loosely organized group of Flagstaff gardeners. They meet occasionally to share seedlings and seeds, to listen to an expert, to visit one another’s gardens, and just to hang out with like-minded people. Jean has taken it upon herself to distribute NoLo to her fellow club members in the spring of the year. My curb-side purchase was at one of the irregular meetings. The stuff’s not free. She orders it and divvies it up for Club members.

By the way, if anyone wants to belong to a low demand, no dues club with friendly, intelligent members who love to garden, the Garden Club is a sure bet. Just email Jean at djhockman@npgcable.com to get on the club’s emailing roster.

Back to grasshoppers. They’re a formidable enemy, bringing to mind accounts of mass suicide attacks, coming in wave after wave, unstoppable fanatics, impervious to fear. One theory about grasshopper fanaticism is their cannibalism. The front lines fear being eaten by the rear lines if they stop their forward march.

During advanced training in the army, a retired brigadier of the Irish Guards told me, “Sergeant, never underestimate the enemy. Know him like the back of your hand. Find his weakness, and when he’s on the cusp of an attack, strike at his weakness, not his strength.” So it is with grasshoppers. Gardeners have to know them and never underestimate them, and when they begin to attack, strike at their weakness.

The first thing to know is that they are already in the garden buried in pods of eggs in the soil, laid by grasshoppers last fall. Terrorist subversives, they can’t be seen, but be assured if there were grasshoppers last fall, they’re lying low now during the winter, underground and unseen cells, waiting to attack in the spring.

NoLo, short for Nosema locustae, is bait made of flaky wheat bran, sprayed with a suspension of distilled water, a sticking agent, and Nosema locustae spores. Non-toxic to human beings and other forms of life other than grasshoppers, the spores carry a disease fatal to grasshoppers. The death isn’t sudden. Once ingested, the spores pierce the mid-gut and slowly destroy their digestive systems.

In the spring before the grasshopper nymphs have hatched, the tactic of choice is to spread NoLo around the yard’s perimeter in the bare spots where the eggs have been laid. The reason is that NoLo works best on grasshopper nymphs and doesn’t work as well on mature grasshoppers. As Nathan Bedford Forrest, the Confederate cavalryman, said, “I git thar fustest with the mostest.”

As the gluttonous grasshopper nymphs hatch and emerge, they’re ravenously hungry and eat their favored wheat bran laced with Nosema locustae and slowly die. Since grasshoppers are cannibals, NoLo is a gift that keeps on giving as their comrades in arms eat their diseased, dead, and fallen comrades, thus ingesting the disease once again.

Since no one tactic destroys grasshoppers, one shot of NoLo won’t do the job and should be repeated every few weeks throughout the year. It’s a conflict with many skirmishes. Consequently, there’s more to come on the tactics of grasshopper counter-terrorism, so stay tuned. Admiral William F. “Bull” Halsey, Jr., said it best, “Hit hard, hit fast, hit often.”