Anyone fortunate enough to take Latin as an adolescent remembers the beginning of Julius Caesar’s Commentary on the Gallic and Civil Wars. With a simple, declarative sentence, he wrote, “Gallia est omnis in partes tres.” (All Gaul is divided into three parts.) The parts were the Belgae, the Acquitani, and the Celts, all of whom were markedly different from one another. So it is with beans (Phaselous vulgaris), the snap, the shelled, and the dry. Rather than take on all the beans, as Caesar did Gaul, our concern is the snap, formerly called stringed, sometimes green. Needless to say, dry Pinto beans are markedly different from a freshly picked, tender Blue Lake.

As with most clearly stated distinctions, Caesar did not include the overlaps. So it is with beans. Some shelled beans become dry. Snaps can be shelled and dried. However, the heart of the matter is the preferred state in which they are eaten. Dry Pintos are eaten only after being soaked, boiled, and simmered. Snaps are eaten when green or immature.

Snaps come in two sizes, pole and bush, although some bush are straggly and need support. Also, they come in three colors, green, yellow, and purple, although some are mottled. Pole beans require more work, as in poles, trellises, ladders, lattices, fences, strings, corn stalks, or anything that works. As with tomatoes, pole beans don’t do well by themselves, always needing something on which they can hang, but they produce more than bush beans and are tastier to boot. The only advantage to bush beans is that they are easier to grow, a considerable advantage.

Snap bean fanciers begin with the Kentucky Wonder pole bean, an heirloom from the 1800’s. First produced in 1864 as the “Old Homestead,” it was renamed “Kentucky Wonder” in 1877 and has been the most popular snap bean down to today along with the Blue Lake. A genuine American heirloom, the Kentucky Wonder is prolific, disease resistant, and tasty. It’s the old standby of snap beans and American as apple pie.

As with artichokes, snap beans are best eaten when immaturely tender and tasty. A mature snap is fibrous, dry, stringy, and wanting in savor. After much chewing all that is left is a flavorless mass of fiber difficult to swallow.

However, there’s a lot to life beyond the familiar. Hanging out
with Kentucky Wonders is safe and rewarding, but a trip to Europe is salutary for the soul as well as savory for the palate.

The French, as always, have a fancy phrase for the snap bean and everything else. Haricot vert, pronounced ah ree koh Vehr, literally means green bean. Haricots vert are served in fancy restaurants. They are slimmer, longer, tenderer, more elegant, and thought more flavorful than American snap beans. Amongst the literati, cognoscenti, and gastronomes they are fashionable if there can be such a thing as a fashionable bean.

Two interesting haricots vet are the purple pole A Cosse Violette and the yellow wax bush Beurre de Roquencourt. Both reach maturity in 55 days. With these two snaps Wolfgang Puck of Malibu has nothing on the backyard gardener of Flagstaff.

Of course, a trip to France is best finished with a trip to Italy, the home of the Anellino snap bean, a bean in the shape of a shrimp, grub, or sleeping dog with its snout touching its tail. Children who view eating as entertainment, that is, they play with their food, will love the Stortino de Trento, a mottled green anellino bean of varied colors which curls upon itself. Another Italian is the Marvel of Venice, a long, yellow, flat pole bean of rich taste.

A select few remaining adolescent Latinists may recall the Venerable Bede’s simple, declarative sentence with which he began his 8th century Ecclesiastical History of the English People, “Et Britannia insula est” (And Britain is an island.) For High Country gardeners their backyard gardens serve as an island in which they can to grow fresh, e. coli free, and flavorful snap beans which are served at the fanciest restaurants in all corners of the world. Without leaving their backyards they can eat the best that money can buy. 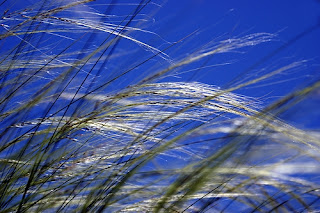 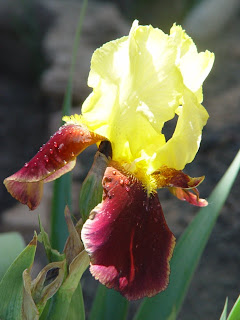 The word “xeriscape” has a harsh, Puritanical ring to it, indicating bans and curbs rather than opportunities and possibilities. Sad it is, but some purist xeriscapers smack of a dismal self-righteousness that loves to say “no,” whose horticultural ethics are anti-excess rather than pro-beauty. Actually, xeriscape means dry landscape or a garden congenial to Coconino County, the Colorado Plateau, a real simpatico for the sere of the Southwest.

The real issue then is the means to have lush, beautiful gardens on less water than a tropical rain forest, something like a water budget. The vice against which purist xericapers rail is excess, and, indeed, excess is a threat to a budget. Also, excess is bad taste. G.K. Chesterton observed that art is how people respond to their limitations. So how do we spend less and have more beauty? What it takes is imagination!

Happily, God has given us imagination and the Mexican feather grass (Nasella tenuissima,) a gardener’s delight. Its leaves are so fine they sometimes tangle, but sadly not a tangle with which to dally. Yielding to a breeze with the grace of a ballet dancer it does a light fandango with castanets and in triple time in a good wind with which Flagstaff is blessed (no smog.) Its tall (2ft to 3ft), light green set amongst the lower blue green of a blue fescue (Festuca ovina ‘Glauca’) make an beguiling accompaniment to a small cluster of bearded iris (Iris germanica). As in all art, gardening, especially landscaping, is compare and contrast.

All of these survive, even prevail, on budgeted water, needing water only during dry spells. They can make it on water from dishpans or washing machines. The blue fescue gets even bluer with less water. The voluptuous blooms 0f the bearded iris are one of the few beauties of the world who flourish on a benign neglect and low maintenance. Of course, benign neglect doesn't mean abuse. They need some water and appropriate nutrients. Some bearded irides (plural for iris amongst Hellenistic purists) also come as rebloomers, blooming again in the summer and sometimes in the fall.

The word “iris” is a Greek word meaning “rainbow” or, metaphorically, “halo.” The unknown John of the Apocalypse writes a lovely verse using iris, “Then I saw another mighty angel coming down from heaven, wrapped in a cloud, with a rainbow over his head, and his face was like the sun, and his legs pillars of fire (10:1.)” The setting reads like a thunderstorm over the peaks with flashes of lightning, a rainbow threading its way in and out of a virga, and the brilliance of the sun blazing through gaps in the clouds. All the colors in that scene can be found in irides whose beauty can become, as the Book of Common Prayer reads, “an outward and visible sign of an inward and spiritual grace.”

Perennial grasses and bulbs and rhizomes are all available for gardeners on a water budget. Unless a lawn serves as a playing field, a golf course, or a place for children’s play, grasses suitable to the Southwest offer an intriguing texture. Creeping red fescue (Festuca rubra), a finely-textured, dark green grass, does well out of the sun, forming lazy swirls in the shade. Sheep fescue (Festuca ovina), a dark green, lies flat and in mounds in various patterns and needs mowing with a weed-whacker a couple of times a year. Both of these need only 12 inches of rain annually.

Posted by OLD GEEZER'S REPORT at 10:18 AM No comments: 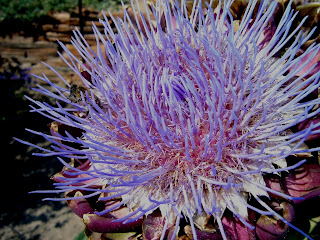 THE ARTICHOKE: An Improbable Vegetable

During the Middle Ages, a gang of Vikings raided Scotland in the dead of night. Trying silence, they landed bare-footed but hadn’t reckoned on the Scotch thistles. Their howls awakened the sleeping Highlanders who drove them back into the sea.

The Scotch thistle became the symbol of Scotland and the emblem of the fabled Highland infantry regiment, the Black Watch, whose motto is Nemo me impune lacessit (No one touches me with impunity.) However, nowadays the Scotch thistle (Onopordum acanthium), formerly Scotland’s early warning system, has been benched as an invasive species and even sent to the showers as the U.S. Forest Service’s Weed of the Week.

Legend has it that the first artichoke was Cynara, Zeus’ beautiful, young earthling mistress with whom he dallied when his wife, Hera, was out of town. When Cynara wanted to return to her mother on earth, Zeus, miffed at the rejection, hurled her back to earth, turning her into the first artichoke. As Cynara is botanical Latin for artichoke so the Arabic al΄qarshuf is the root of English word. Arabic Moors introduced the artichoke to Spain where monks developed it in their monastery gardens.

During the Renaissance, the wives and mistresses of dottled aristocrats weren’t allowed to eat artichokes because they were considered aphrodisiacs. Apparently, they feared their sex-crazed young wives and mistresses would dump them, taking up with younger bucks. Marilyn Monroe was California’s first Artichoke Queen. The oxymoron of a sexy thistle is far cry from “No one touches me with impunity.”

Historically, artichokes can be traced to the 4th century B.C. Martha Washington’s Booke of Cookery had a recipe entitled “To Make Hartichoak Pie.” Early in the 20th century Fannie Farmer introduced artichokes to America in her cookbook’s ninth edition.

Anyone who grows tomatoes knows the drill. With a 90 day cycle from transplant to fruition, the best thing to do, unless the gardener’s a green house horticultural aristocrat, is to start them indoors, like early, seeding two or three seeds ½ inch deep in little discs or pots of sterilized potting soil. Water well and place on a window sill. After the first green appears, fertilize them with a small amount of water-soluble fertilizer. Transplant them to a larger container after the first real leaves appear, and then transplant them outside either after the last frost or before within Walls O’Water. Purchasing an artichoke plant from a nursery is lot easier. However, seeding offers the possibility of exotic varieties, such as, the Italian Carciofo Violetto di Chioggia, a violet tinged artichoke without thorns.

As perennials, artichokes can winter, but as Mediterraneans, four or five inches of mulch, leaves, pine needles, or straw are required. Even then survival is chancy. They grow well in containers, saving water.

Eating artichokes is akin to eating corn on the cob, messy. Rinse and boil them in water with a squirt of olive oil and pinch of salt for 40 to 50 minutes. Crushed garlic cloves, crushed oregano leaves, or lemon slices may be added to the water. When the scales are easily pulled off, drain upside down, and serve with melted butter. The gastronomical prize is the crown, a concave disc at the base of the scales. First, use the lower choppers to scrape off and eat the scales’ fleshy base. Remove the inner, undeveloped flower and savor the crown. A Cream of Tomato, Avocado, Basil, and Artichoke Crown Soup recipe is blogged at http://oldfartskitchen.blogspot.com.

Johann Wolfgang von Goethe, the great German poet and master of nearly everything else, after his tour of Italy, wrote, “Only peasants eat artichokes.” In America, Thomas Jefferson’s “natural aristocracy” relishes corn on the cob and artichokes. Comme il faut.