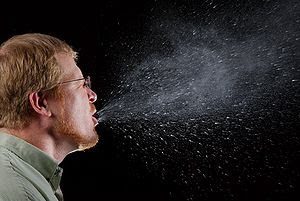 Sneezing people with head colds are an unwelcome sight. They should stay in bed with hot chicken soup, but, no, they appear in public, sometimes at close quarters, spraying everyone in sight. With rheumy eyes and runny noses they are a lot like weeds. Sans merci.

A lot of gardening involves weeding. A weed is an unwelcome plant. It generally is fast growing, ingenious, and supernaturally resourceful.

When the Romans conquered England in 41 A.D., they brought with them the scotch thistle (Onopordium acanthium) which has its origins in the lands around the Mediterranean. It eventually hopped over Hadrian’s Wall, the Roman barrier defending Roman England from the Scots to the north. In addition to the scotch thistle, the Romans also introduced bathing to England. 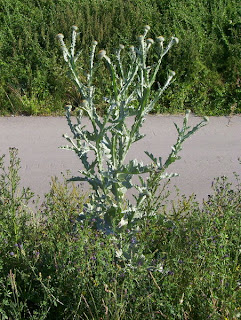 It flourished in Scotland where it proved itself a defense against Viking invaders. In a nighttime sneak attack upon Scotland, the Norse stumbled into a thicket of scotch thistles. Their cries of pain awakened the inhabitants who drove them back into the sea. It was imported into the United States as an ornamental shrub because it’s flowers are beautiful.

Now it has become an invasive, noxious weed, especially in the West where it has become a barrier to cattle. I found a thicket of scotch thistles in a vacant lot near my house and set about uprooting them, a task which requires heavy, leather gloves along with full body armor. The Latin phrase Nemo Me Impune Lacessit (No One Injuries Me Unpunished) is on the national emblem of Scotland along with the scotch thistle. By the way, after pulling them, put them in a plastic garden bag and dispatching them to the county dump. Sans merci. 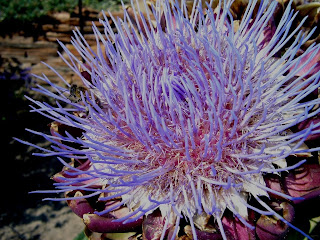 Another oddity is that it is a cousin to the artichoke (Cynara scolymus), both being members of the tribe Cynareae which takes its name from the Greek word for dog because their bracts look like the teeth of a snarling dog. It’s a delightful vegetable with anti-oxidant and anti-cholesterol benefits. Artichokes can be grown in Flagstaff just as can scotch thistles; however, while the artichokes grown here are beautiful to behold, they aren’t nearly as tasty as those grown in Castroville, California. Bon appétit.

Another member of the tribe Cynareae is the Centaurae diffusa, commonly called the diffuse knapweed which in the fall and winter turns into the tumbleweed. It, too, has snarling dog’s teeth. The word cynic comes from the Latin word for dog, cynicus. Cynics are toxic, baring their ideological teeth, claiming that everything is rotten save themselves. 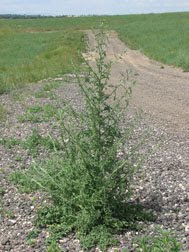 The diffuse knapweed is a true cynic because it poisons the soil around it so that nothing else can grow save itself, eliminating any competition. It’s called allelopathy which means that a plant can release chemicals that inhibit the development and growth of neighboring plants. Just as cynics poison a social environment, so do diffuse knapweeds poison a horticultural environment, eliminating their competition by toxicity. 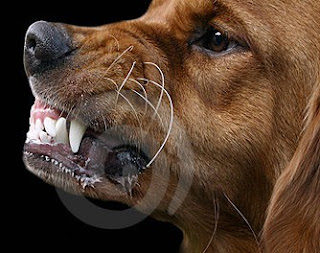 One plant can produce 18,000 seeds which are spread by the wind as its tumbles and sneezes over the land. A genuinely ugly plant, it is scraggly, prickly, and unappealing, with no known benefits. If it had been available to Moses, he surely would’ve used it as a plague.

When destroying it, it should be rooted out before it goes to seed, plant and roots, put into plastic garbage bags, and dispatched to the Environmental Services (garbage can). Sans merci.

And then there is cheat grass (Bromus tectorum), a truly despicable and aptly named form of vegetation. With its lateral roots it sucks up moisture from the soil, depriving other vegetation of moisture. Capable of displacing every thing else, especially native vegetation, it is easily combustible, making it a fire danger. A seedy profligate, it grows almost anywhere in the most miserable of soils, especially soils that have been disturbed. The best thing to do is pull it as soon as it is seen. A native of Asia Minor, it was imported with bales of alfalfa and has no known adversaries. 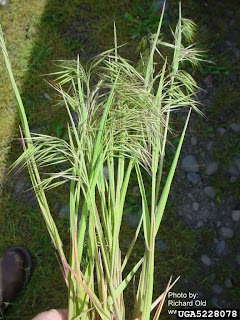 As with the common cold, the Scotch thistle, diffuse knapweed and cheat grass have arrived, and they’re sneezing. Sans merci. 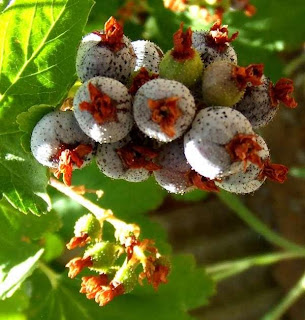 One of the most splendid meals I’ve ever eaten was California golden trout (Oncorhynchus mykiss,) roasted over a campfire, and a cobbler of pink Sierra currants (Ribes nevadense.) Every summer for about ten years, I took young people from my church backpacking in the High Sierra along the John Muir Trail. We packed freeze-dried food which we divvied up amongst the backpackers. An over-privileged student wearied by his forty pound pack dumped his share of the food over the side of the trail. We were one day short of food. 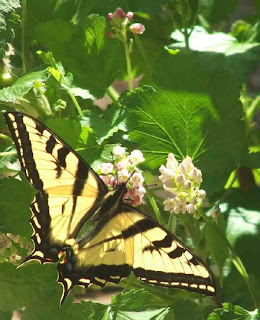 While protecting the offender from the wrath of the others, I began scouting the forest for forage. Remembering my military survival training, I found watercress (Nasturtium officinale) and edible grubs and insects. Fast-food addicts, they all said, “Ugh! Yuk!” Just below a sub-alpine lake, I spied a thicket of pink Sierra currants with its tasty blue-black berries. Along with a couple of non-fishing volunteers, the offender was sent off into the thicket to pick the berries. Those with fishing gear went along with me to the lake and stream to fish for our dinner. 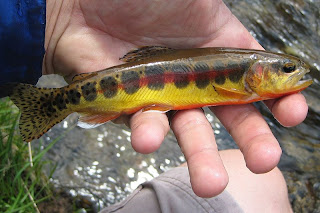 We soon had our limit. I solicited all the graham crackers from the group, and we made a cobbler with the berries. We ran pliable branches from creek-side bushes through the trout from mouth to tail, roasted them over the fire, eating them like sweet corn on the cob.

All of which brings us to our yards, not in the High Sierra, but on the Colorado Plateau, especially berries for wildlife and birds. Pink Sierra currants do quite well in Flagstaff. A California native, it’s found in forests from 3,000 to 10,000 feet. Its berries are sweet, tart, and edible. It thrives in climate akin to Flagstaff’s. It survives both drought and flooding and prefers the company of pine trees.

A deciduous shrub about three to five feet high, it flowers from April through July with white and pink blooms. In the summer, its fruits hanging in six inch cascades are favored by both birds and human beings. Its weeping branches are without thorns, making it safe for children. If unavailable in our local commercial nurseries, it can be ordered online at http://www.laspilitas.com. 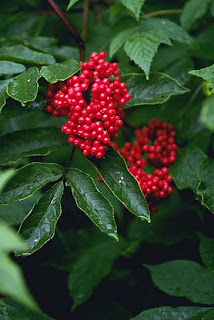 Next in our list of food for birds is the red elderberry (Sambucus racemosa.) However, its berries and plant are slightly toxic to human beings, producing a derivative of cyanide. For this reason, children should be kept from playing with the plant, flowers, and berries. However, with careful preparation a delightful cordial and jelly may be made from the berries. 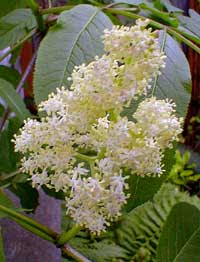 It can grow into either a clump several feet high or a small tree. It favors well-composted soil and regular watering. The green leaves are either oval or oblong. In the late spring its cream-colored flowers bloom in large clusters followed by small black, blue-black, or red berries. Both the flowers and the bush itself are slightly unpleasant to the nose but charming to the eye, especially when in bloom and fruiting. More importantly, it is attractive to birds and particularly winsome to doves. 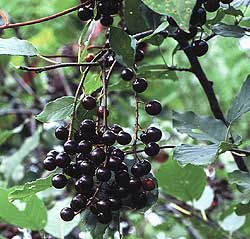 Not to be forgotten is the western chokecherry (Prunus Virginia) which produces beautiful pendulous clusters of creamy white flowers from April to July. The flowers eventually turn into astringent red and dark purple-black berries ¼ to ½ in size. The darker, the less astringent. The sour taste is the reason for the word “choke.” 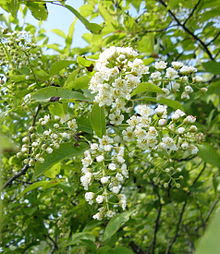 The plant including its seeds is toxic to humans and also to horses and other animals with segmented stomachs. With the exception of the flesh of the berries it also produces a form of cyanide when eaten. Along with the red elderberry mentioned above, it makes an excellent hedge from twelve to twenty feet high, bringing privacy to the garden. 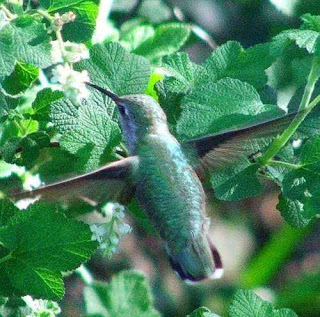 Shade tolerant, it needs full sun to produce berries good for food. Happily for Flagstaff, it is moderately drought tolerant. The berries have been a major food for many Native American tribes and were often used in pemmican. Also, they can be used for wine and jellies; however, mostly its fun watching the birds eating the berries.

Dana Prom Smith edits GARDENING ETCETERA for the Arizona Daily Sun, and can be emailed at stpauls@npgcable.com and blogs at http://highcountrygardener.blogspot.com.
Posted by OLD GEEZER'S REPORT at 8:38 AM 8 comments: