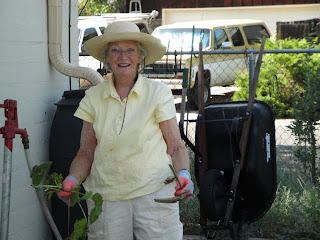 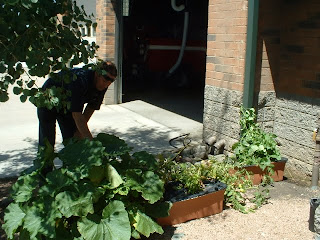 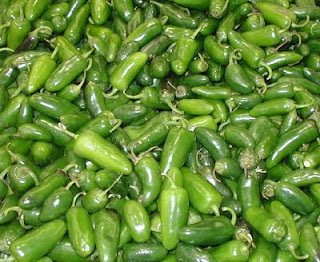 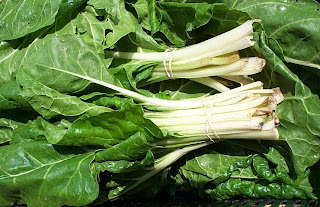 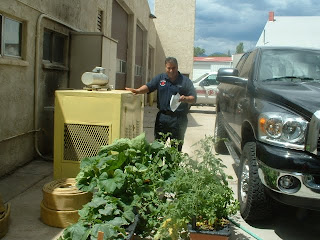 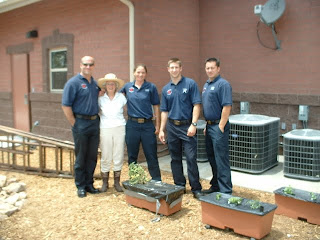 A CULINARY GUARD FOR FIREFIGHTERS

I first saw Bev MacAllister one evening across a crowded room at a fluorescently lit meeting of the Master Gardener Association. I felt an affinity. She sparkled, especially her eyes. She celebrated her age with joy, doing something for someone else without profit or aggrandizement. She develops vegetable gardens at our local fire stations, enabling firefighters to grow and eat their own fresh vegetables.

Age has given her the time and experience to manufacture a model of Ernest Hemingway's "built-in shockproof crap detector," the better to cope with that salient feature of modern culture. It isn't lying so much, as Harry G. Frankfurt writes, but someone who "doesn't know what he is talking about" (On Bullshit, Princeton University Press, 2005.)

Of its four commonest forms, pomposity, fanaticism, inanity, and authority, she's dispatched them long ago. She's not intimidated by political, corporate, academic, ecclesiastical, or professional pomposities. Well-educated, she glides by on the other side of the street. A pragmatist, she holds her beliefs deeply, especially about organic food and modern medicine, but disparages the fanaticism of ideologically-driven bigots with "daggers in their smiles."

Inane, she's not. No sympathy for yesterday's hackneyed platitudes and clichés. As in Kansas City, her mind "is up to date," ready to separate the sheep from the goats. Balancing the equilibrium between spirituality and skepticism, cynicism doesn't begrime her mind while she gracefully "cuts the crap." Spiritual without religious authoritarianism, she's secular without scientific absolutism.

Bev's "crap detector" liberates her from that "salient feature" weighing heavily on many people, leading them to waste their lives in mistaken certitudes followed by confusion, anger, and depression, unaware of the world around them.

At peace with herself, knowing her own shortcomings and foibles, Bev takes herself for what she is. She doesn't fiddle with her self-image and is free to look outward. An existentialist, her life is now.

Bev's passion, along with organic gardening, is the welfare of firefighters, especially their cuisine, cuisine being the cornerstone of health. Ill-fed, decrepit firefighters are not a good thing. Problematically, firefighters do their own cooking at the firehouse but aren't required to pass a culinary course before becoming firefighters. My son, in his early years as a firefighter and paramedic in Los Angeles County, frequently called for culinary suggestions on easy-to-fix, meat and potatoes recipes. Swiss chard hasn't been a regular on firefighters' fare which is precisely where Bev enters the scene of Flagstaff firefighting.

She does three things. She helps them grow vegetables at the firehouses, takes them vegetables from her garden and from wherever and whomever she can, and teaches them how to cook them. This is not easily done because most Americans are alienated from their senses, particularity their sense of taste after generations of fast-food. They've yet to pull a carrot from the ground or taste a tomato off the vine. Their exclusive spice is salt.

Bev is up to the task. "I don't baby sit them. I just give'em a chance to experience growth and harvest, especially finding that freshly picked vegetables taste better." While her micro task is gardening, vegetables, and cooking, her macro task is an expansion of life's experiences.

Funding the operation herself with support from Viola's, she uses containers in the firehouse gardens. "That way," Bev said, "they can move them around, like the hot peppers. They were startled at the difference in taste between the store bought and fresh hot peppers from the garden. Now, they're going to bring the containers of hot peppers into the station and grow them in sun-lit windows for the winter."

Bev not only sparkles, she's joyful. A happy warrior in the battle for good organic eats, she stands culinary guard for the first responders.

Hi Dana ... Loved this article on the veggies and firefighters. Our granddaughter, Lovieanne Jung, an Olympic Gold and Silver medals winner (Athens and Beijing) has retired after Beijing from her women's fast-pitch softball days. She has since passed the test to become a firefighter -- a career that really surprised us. So I think she will enjoy this idea -- and maybe pay it forward, too. Thanks so much for it and b.s., too. ;) ;) Judy