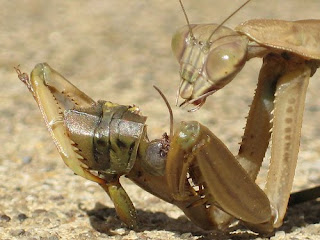 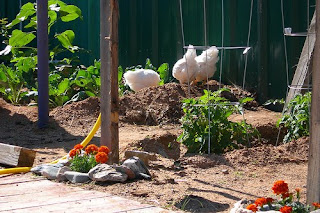 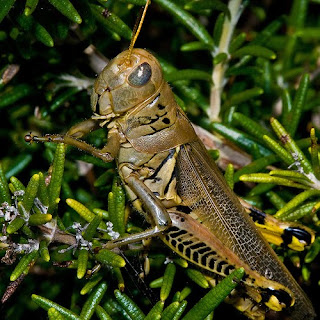 PACKING HEAT IN THE GARDEN

Artur Rodzinski, the famous conductor of the New York Philharmonic during the middle 1930's, strapped on a holstered pistol under his white tie and tails when conducting the orchestra at Carnegie Hall. "Packing heat" re-assured him while facing down the famous orchestra. One musician, albeit a conductor, facing down a whole gang of accomplished musicians, imbibed as they are in their own interpretations of the score, has to be intimidating. The New York Times called him, "colorful." Whatever it was, he came ready for combat.

Alas, gardeners come ready for combat because they like "kings go forth to do battle in the spring of the year (II Sam 11:1.)" However, they'll not be facing down a gang of fellow gardeners on how to garden, but rather hordes of grasshoppers, emerging from their underground hideouts or flying in over the hill. In autumn, grasshoppers lay their eggs in the ground, forming cells of horticultural saboteurs. In the spring of the year, they slither out, voracious nymphs with the appetites of adolescents, and with their cohorts sweeping up from the dry lowland plains and steppes, they lay waste the lush and verdant gifts of a wet winter in the High Country. Indeed, the USDA is forecasting a heavy infestation this year.

An asymmetrical war, there are no victories and defeats, only stalemates and standstills. Handguns and assault rifles are futile. As a war of attrition, it's possible to fight them to a draw, wearing them down, smiting these orthopterous philistines "hip and thigh (Judg. 15:8.)"

As my instructor in military counter-intelligence, a retired brigadier in the Irish Guards, said, "First find their weak point and then gnaw at it."

If sins are points of weakness, then of the seven deadly sins, gluttony comes to mind for grasshoppers while Wall Street bankers favor insatiable greed. Since grasshoppers have rapacious appetites, the strategy is to gnaw at their gluttony, offering them confections and delights laced with death.

Of course, gardeners have no business polluting the earth with poisons or pesticides since they are not only "tree-huggers" but also "earth lovers." Thus, the most effective weapon in the gardener's arsenal is NoLo bait, a confection made of flaky wheat bran, sprayed with a suspension of distilled water, a sticking agent, and Nosema locustae spores. When the grasshopper ingests the NoLo spores, the spores gradually breach the grasshopper's mid-gut, causing a rapidly occurring death in the young and a slower death amongst the adults. Once the mid-gut is breached, bacteria can enter and infect the grasshoppers as the spores continue to eat the grasshopper's fat, causing death by lassitude and sloth. Happily, NoLo bait is not harmful to "all things bright and beautiful, all creatures great and small," just grasshoppers.

The problem with NoLo bait is that it's slow. Gardeners often panic when hordes of grasshoppers appear over the crest of the hill, clamoring for methods of instant destruction which often means pesticides, infecting the earth with poison. Thus, NoLo bait should be applied before the grasshoppers either come out from hiding in the ground or flying in from afar. Early in the game in May, when the grasshoppers expect easy pickings, lay out a spread of No Lo bait to whet their appetites, and let them have at it. The old brigadier would've been proud.

For those preferring combat by proxy, there are three groups of
voracious allies, (1) chickens, turkeys, ducks, and geese, (2) praying mantises which can be purchased at commercial nurseries, and (3) birds, making a bird friendly garden advisable with feeders and bird baths placed, cat safe, throughout the garden.

For the nimble and quick who prefer close combat without jumping over the candlestick, they can grab them in flight, squishing them in their hands or, when they're in repose, mashing them under foot. Sans merci.