A GENEALOGICAL GARDEN OF JOY 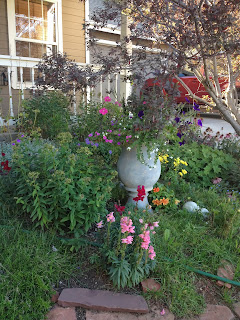 As I tool down the street in front of our house, I pass some lovely gardens as well as some drearily graveled yards, but the garden with which I would collide if I didn’t hang a left at a junction is a sheer delight of colors and shapes.  The flower that has intrigued me the most is a large white peony, partly because I have failed at getting my peonies to bloom for the last eleven years.

The garden’s the work of Kristi Baty.  I’ve seen her husband, Ace, a microbiologist who is an associate at W L Gore, doing grunt work around the yard, but the garden is Kristi’s baby.  However, the peony isn’t.  It’s her great, great grandmother’s baby.  The peony is peripatetically genealogical, traveling with familial migrations and generations from , to , to , and finally to .  It’s a treasured heirloom.

The garden isn’t Kristi’s only baby.  Along with Ace, she’s raising two teenage girls, and with degrees in cultural anthropology and elementary education she owns and operates through which 400 children pass each week on their way to better balance and health. 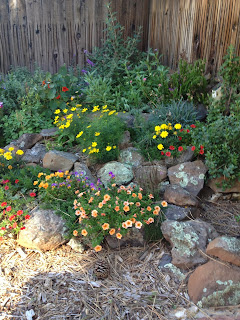 But on to her garden.  She calls it a mishmash, but it’s really a profusion of colorful plants, several of which are family heirlooms and all of which are perennials.  Her method sounds haphazard, but the result is not.  Some gardens are plotted as though they were geometric exercises, carefully laid out ahead of time on graph paper and precisely executed; however, others are the products of a vision perceived by the gardener, the details of which are seldom known at first.

These gardens unfold as the vision is gradually revealed to the gardener, something like Abraham who “went out not knowing where he was to go (Heb.11:8).”  They require a faith that the vision will ultimately be revealed, perhaps not all at once, but bit by bit.  Faith requires that the visionaries trust themselves enough to live without the certainty of knowledge.  The result is a graceful garden in which all the lines are curved, leading the eye from one space to the next as though the garden were a journey with an intriguing something around the next curve.

Some of the journeys in the garden lead her into her history and heritage.  Unlike so many rootless people, Kristi has kept faith in her garden with her forebearers.  It is difficult to know ourselves if we don’t know from whence and whom we have come.  In short, her garden has a memory, and as she enjoys her garden, she remembers.

If Kristi’s garden is a memory filled with ancestors, it’s also a garden filled with love.  She created a bower under some lilac bushes where their daughters, Ellie and Madigan, could hide and read, a place for children.  Off in the corner is a rock garden filled with cascading plants.  There is a patio with tables and chairs for warm weather parties and dinners, but most of all there are the flowers, tulips, daffodils, iris, gladiola, and dahlia, spread throughout beds scattered here and there in the garden.  Her favorite flowers are delphinium, daisy, phlox, sweet peas, and clematis.

Save for the concrete driveway and steps in the front and a small pad off the sliding glass doors in the back, there isn’t a straight line in the yard.  The reason is simple.  Straight lines are as dull as dish water and impotent as well.  A skier is all S lines as is the cocked arm of a boxer or quarter back.  Once the skier stands up straight, it’s all over.  When the punch is thrown or the ball passed, the power is spent.  Curved lines are graceful and powerful.

THE HORSES NEXT DOOR 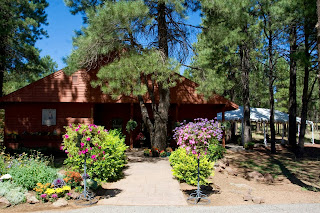 Karen Sorensen of Thornagers says that one of her blessings as a gardener is the horses next door.  She’s right.  Having horses next door is a big asset in gardening, especially in where the dirt is so inhospitably rich.  It’s rich in nutrients from all the volcanic debris scattered around the place, but inhospitable because the nutrients are unavailable to the plants.  The problem is that the soil suffers from a want of organic matter, and organic matter not only makes the dirt far more rich and friable but also hosts organisms, especially those strange creatures the botanists call “mycorrhizae.”  Mycorrhiza in the singular, it’s botanically mangled Greek with Latin endings meaning root fungus.

Mycorrhizae are middlemen, transferring the soils’ nutrients to the plant’s roots, and without them there is no transference.  The technical definition is “a symbiotic association of a fungus and the roots of a plant,” which means they’re not really an object, like a wrench, but a relationship, a dynamic.  Unseen with the naked eye, under the microscope they’re weird looking, like that diaphanous fluff used at Halloween.  Whatever they are, they’re essential which is where the horses next door come in.  Mycorrhizae flourish in compost made of hay. 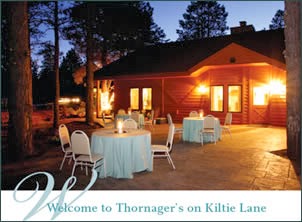 In Karen Sorensen’s composting paradise she can use the spoiled hay, bedding, and manure and mix it with the coffee grounds and green kitchen waste for a devils’ brew of compost, and she has lots of coffee grounds and kitchen waste when she caters events.  The nitrogen in the grounds, waste, and horse urine break down the carbon in the spoiled hay and bedding, releasing all manner of botanical goodies for the garden, including mycorrhizae.

As anyone knows who has eaten the delightful cuisine served by the staff at Thornagers, the main dining room is a splendid baronial affair with a massive fire place, but our concern is what might be called “the outback,” for want of a better term.  It’s a sunny clearing in the forest behind the dining room.  The pleasant and enjoyable surroundings of the baronial dining room and the “outback” are so lovely that they draw denizens all the way from urban and points beyond for weddings, receptions, and “every fancy ball.” 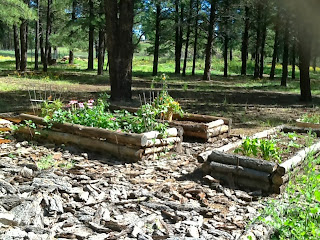 However, our concern is with a green house, a large hoop house, and several raised beds in the outback.  Because of the massive volume of vegetables she uses at her events, she cannot grow all of the vegetables she needs, but she knows where they come from.  So, she focuses on herbs, flowers, and some vegetables hard to find, and, as any foodie knows, herbs are the difference between “plain eats” and fine cuisine.  Something like mycorrhizae, herbs makes things happen.

The greenhouse and hoop house are set over to the side of the outback.  However, the raised beds, bounded by logs, are scattered throughout the clearing where guests, strolling amongst the tents, sipping champagne and nibbling on canapés and crudités, can savor the beauty and aroma of the flowers and herbs.

In an age of substitutes, modifications, and fillers, authenticity is one of the rewarding experiences in eating the cuisine at the Kilted Cat.  The herbs and flowers have the finest of composted beds, thanks in part to the horses next door.  There is a world of difference between sweet basil freshly picked the morning of its use and a limp leaf which has been hanging around for days in a store after having been processed and shipped from afar.

One of the consistent themes of modern society is replacement and substitution with the result that we become further and further removed from the natural process.  Industrially produced tomatoes whose only distinction is an astringent taste are not the same fruit as home-grown tomatoes, such as those grown in the Karen’s green house.  Also, there are Karen’s flowers in baskets, planters, and pots.  Food is as much a matter of the eye as it is the tongue.  Karen says:  “Good food starts with good, raw ingredients.”  One sure fire way to get “good, raw ingredients” is to grow them or know where the come from.

Dana Prom Smith and Freddi Steele edit Gardening Etcetera for the Daily Sun in which this article appeared 9/14/2013.  Smith emails at stpauls@npgcable.com and blogs at http://highcountrygardener.blogspot.com.


Posted by OLD GEEZER'S REPORT at 6:43 PM No comments: