GARDENING AS A MEMORY 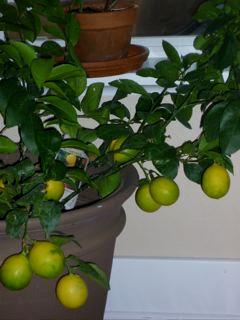 Our memories are pretty much what we make of them.  Our histories are recorded in our unconscious process, some so deeply embedded that we can’t recall them.  The stuff of our memories is what we've chosen to remember out of our histories, and those choices are shaped by the meaning we've chosen for ourselves.  Some people select the motif of victimization to guide the creation of their memories.  Others are survivors or prevailers.  Some choose indigations, others fragility or triumphs, and so on.

Saint Augustine (354-430) in his Confessions (10.11.18) makes a similar point, we "gather together ideas which the memory contains in a dispersed and disordered way and by concentraing our attention we arrange them in order" so that they can "easily come forward and are no longer hidden and scattered."  It's called bringing things to mind, but we only bring things to mind that fit the way we have shaped our personalities, be it pilgrim, victor, conniosseur, adventurer, and so forth.

Alex Martinez brings things to mind lying in the grass next to a bed of his mother's gladioli.  He remembers the gardens of his childhood, not merely his parent's garden, but also the gardens of his neighbors.  Happily,  his neighborhood was a polyglot of Midwesterners, Italians, Lebanese, and Mexicans so he was blessed with a variety of gardens and kitchens.  The men worked with their hands to earn their money, and since there was not a lot of excess money, they grew much of their own food. 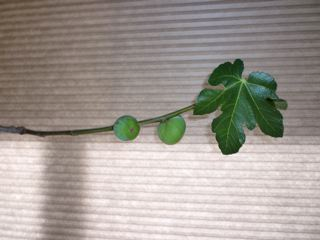 When Alex gardens, he always has in mind on the gardens of his childhood which means that Alex gardens with joy, if eccentrically.  He grew up in Tucson.  He has a fig tree in one of the rooms in his house.  It just about covers one wall, but he eats fresh figs, right off the tree.

Now, Alex is no nut case.  He's a retired school superintendant with a doctorate from the University of Arizona and a retired captain from the U.S. Navy.  He remembers his childhood and adolescence gastronomically which is some ways is better that photographically.  When he eats a fig, he remembers the Lebanese family that lived across the street.

For the most part, the men in his neighhood were World War II veterans and had been trained and educated on the famous G.I. Bill of Rights.  So they were men with stories to tell.  A childhood with story tellers is hard to beat.

In addition to a fig tree, Alex also has Meyer lemons growing inside his house.  Indeed, one day while hanging out with him, sipping wine and munching on crackers and cheese, a Meyer lemon sat at the head of the breakfast table as though it were a member of the family.  There are other citrus trees placed strategically throughout the house, next to windows with lots of daylight.  His genius is that he sees his house a living greenhouse as well as a domicile.  If, perchanve, one were to visit him and his wife, Lisa, an artist, sooner or later, more likely sooner, Alex would drag the visitor off to his orchard.  In short, Alex is proud of his garden. 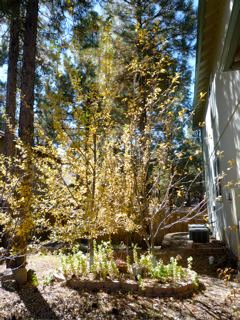 Now, his domiciled garden is only half of it.  Along one side of his house is a small apple orchard with different varities.  With an eye to the future he is allowing them to grow to a certain height before he tops them so that their shape will be akin to that of an umbrella, protecting the nascent blossoms and fruit below.  This way he figures that the apple trees will be less susceptible to the vagaries of Flagstaff"s springtime frosts and freezes.  He figures things out.


When I first saw his property undeveloped, I despaired for him because he is my friend.  His house sits on a small hillock with a backyard that falls off precipitously, plunging down and then rising again to form a wooded ravine. Rather than letting it go, he has begun building terraces, up and down, for flowers and vegetables.  However, I didn't understand his genius and the depth of his joyful memories.  With his memories, Alex celebrates life in his garden, inside and out.