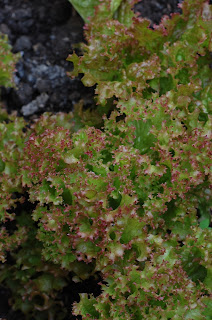 Pansies ain’t no pansies. In fact, they’re a hardy lot. Pansies (Viola tricolor) look sweet and smiling as though they were charming, soft, Southern Belles meaning to please, but beneath that winsome appearance lies a will of iron. They’re tough and fit for the High Country. It doesn’t take much to imagine them riding on the front seat of a buckboard, elegant coiffures hidden beneath a bonnet, reins in hand, cracking the whip, trekking all the way from Virginia to the Arizona Territory. They can take it when it comes to temperature, but as with people, whose faces they disquietingly resemble, they need warmer clothing for the cold winter months. Akin to William Faulkner’s Dilsie, pansies endure. They don’t overpower. They last.

Pansies aren’t the only tough ones. So are the lettuces (Lactuca stiva). They look frail, but they literally have an iron backbone with 6% iron content. With the exception of the ubiquitous iceberg lettuce which has little nutritional value, the other lettuces are jampacked with good stuff, such as anti-oxidants, folic acid, potassium, vitamins A and C, and calcium. Also, they have no fat, cholesterol, and salt. As with celery which has few calories, eating lettuce may happily produce a caloric deficit. It even tastes good, almost sweet.

Some divide lettuce into an either-or category of loose leaf and head. However, as with other Manichaean categories, such as good or bad, right or wrong, loose leaf and head don’t explain much, leaving out all the other possibilities as Nicolas de Cusa pointed out in his coincidentia oppositorum. There are at least four types of lettuce, head lettuce, romaine, loose leaf, and butterhead and probably more. The most useful for the backyard garden in the High Country is the loose leaf because it is the fastest to mature and offers a wide variety of types.

A good type with which to start is the Black-Seeded Henderson, a lime-colored, broad, crumpled leafed lettuce. Its seeds can be planted 3 to 4 weeks prior to the first frost which means that High Country gardeners can stretch our notoriously short growing season. It can survive some drought, a little frost, and heat. As with some human beings it is only bitter when old and neglected.

Another type friendly to the backyard gardener is the Forellenschluss (Trout’s Tail), a romaine heirloom lettuce coming from Austria. Its olive-green leaves are bedecked with pretty russet-colored freckles. Forellenschluss lettuce gives the feeling and taste of cool streams and clean, crisp air. In addition to adding class to a salad, Forellenschluss can be started early, a little less than a month before the last frost.

The last is the Gina Lollobrigida of lettuces, the Lollo Rossa. With the nickname, La Lollo, the extravagantly sensual and beautiful actress of the 50’s and 60’s is a fine symbol for this Italian heirloom lettuce. A frosty green rim of leaves surrounds a rosette of frilly, red-edged leaves, a real gorgene. It calls to mind her statement when she was 73, “I’ve had many lovers and still have romances. All my life, I’ve had many admirers.” So it is with the lettuce La Lollo Rossa. It is well-loved and admired. It’s also easy to grow and tastes great.

Such an elegant salad can even be garnished with the blossoms of our hardy old friend, the pansy, or the nasturtium. A raspberry-vinaigrette dressing would be the pièce de résistance. Among effete Easterners, San Franciscans, and West Los Angeles types this is all haut cuisine, but it tastes pretty darned good up here in the High Country. Sounds a lot more appetizing than a hunk of iceberg drowned in thick, gooey, million-dollar caloric Thousand Island dressing. The kicker is that all this can be grown in containers on a window sill, a balcony, a deck, or a patio and in backyard beds.