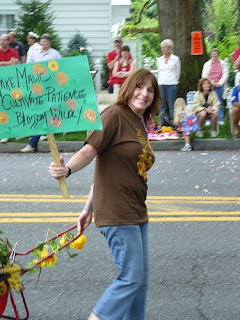 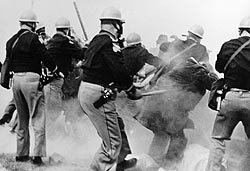 James Reeb, a social worker in a Boston slum and Unitarian Universalist minister, was clubbed to death by racist thugs in Selma, Alabama, March 9, 1965, as he left a restaurant on his way to a meeting with Martin Luther King, Jr., at the Brown Chapel. He died in a Birmingham hospital on the 11th, forty-four years ago. The Greek word martur means "witness." Jim bore witness.

We'd been in the Army together but had seen each other only once in about twenty years until that day in Selma. We spoke briefly and went our ways. Then down the street I heard a commotion and saw a rush of people and police. Jim was being beaten to death. As I tried to break through the crowd, the police hustled me to the jail and then the bus station and told to get out of town.

The thugs were later tried and acquitted to the cheers.

I remember the eyes of death in faces of the crowd and the police. The same eyes of death afflict our modern culture, the racial wisecrackers, the denigrators of women, the purveyors of hate and violence. However, we seldom see them in the eyes of gardeners. The reason is simple, gardeners love life. Now, there are a lot of nut bags, cranks, grumps, ditzes, and scolds amongst gardeners, but behind their often odd behaviors is a love of life, else they wouldn't plant and seed year after year. Theirs is "a peaceable kingdom."

Not only to do they plant and seed, they also care for living things as well, but beyond that they deal with death as lovers of life. Lovers of death don't deal well with death because they don't believe in life. Inexplicably, growing things die, and, as such, there is always in a garden the mystery of death. Gardeners never quit, they just seed and plant again. Never forsaking hope, abiding in faith, they love life.

The lovers of death tend to get fixed on things past, arrested in the recesses of their own histories, hoarding their grievances, treasuring their indignations. The lovers of life move on, aware that they are writing their own histories in the moment. They move forward. If a plant doesn't thrive on one spot in the garden, gardeners find a new spot. If it doesn't thrive in the new spot, they'll try a different plant.

Lovers of death have difficulty with nature's inevitability and divine irony. They have trouble with brick walls. They like to run into them head first. They believe the old adage, "If at first you don't succeed, try, try again." Gardeners will more than likely rewrite the old adage, "If at first you don't succeed, find out why, and then do it smarter the second time." Plants cannot be forced to thrive where they don't want to thrive. Not many people realize it, but plants have choices, too, and some of them don't it like it high, dry, cold, and windy. They like it low, humid, hot, and still. Some like swamps.

Gardeners not only love life, they like to share it, always trading and sharing seeds, plants, and tips. They push their cuttings on their friends and neighbors, giving them flowers and vegetables, often times more zucchini than their neighbors ever want to see again. They're always happy to talk with total strangers about their flowers and vegetables, even inviting them to tour their backyards. Sometimes, they look a little zany in their enthusiasms.

Also, gardeners thrive in adversity, else they wouldn't garden in Flagstaff'. Very little daunts them, be it weather or pestilence. They rise to the challenge, believing in life in the face of adversity, as in growing tomatoes in the High Country.

The Church of Scotland's prayers of thanksgiving at a funeral read, "We thank Thee for the goodness and truth that have passed from their lives into the lives of others, and made the world richer for their presence." Gardeners make the world richer for their presence with goodness and truth as well as beauty and life. The proof is in their eyes. They're bright with a love of life.

God grant me the serenity
to accept the things I cannot change;
courage to change the things I can;
and wisdom to know the difference.
Living one day at a time;
Enjoying one moment at a time;
Accepting hardships as the pathway to peace;
Taking, as He did, this sinful world
as it is, not as I would have it;
Trusting that He will make all things right
if I surrender to His Will;
That I may be reasonably happy in this life
and supremely happy with Him
Forever in the next.
Amen.
--Reinhold Niebuhr--
Posted by OLD GEEZER'S REPORT at 2:39 PM No comments: 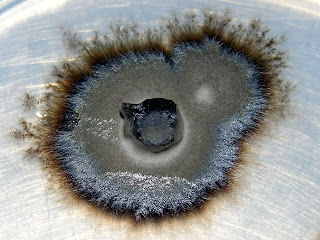 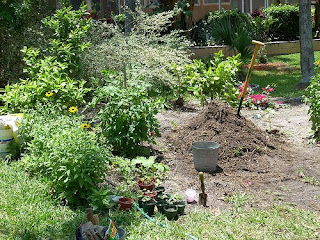 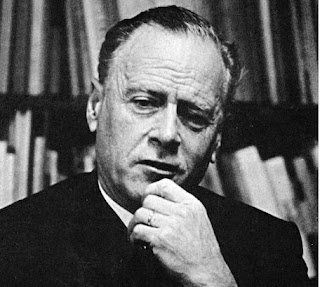 The author of such popular phrases as "the medium is the message" and "global village," Marshall McLuhan in Understanding Media wrote that a medium is an "extension of ourselves." A medium could be a hammer, fork, cartoon, rifle, fishing pole, tennis racket, motion picture, or even soil. It's anything by which people extend their ability to affect their environment, empowering themselves to bring about a cascade of changes.

Dirt isn't the same thing as soil. Soil is manufactured by gardeners using sand, silt, clay, and organic matter, in short, enhancing what has been given them. In Flagstaff, we also have limestone, sandstone, and volcanic debris.

The problem with clay, of which there is an abundance in Flagstaff, is that when it dries, it hardens, so hard that most of the garden plants wither because their roots cannot penetrate the clay. However, it holds moisture well while sand doesn't. Mixing sand with clay loosens the clay while keeping its ability to retain moisture.

Alas, sand is scarce in Flagstaff, but we have a good substitute which may be better than sand. Volcanic cinders are everywhere and are about 2/3 sand and 1/3 geochemical nutrients. Mixing volcanic cinders with clay loosens the clay. Weathering, such as harsh winters, howling winds, and torrential rains, gradually releases the nutrients from the cinders.

Forget about silt which occurs in washes, along stream beds, in certain meadows, on alluvial slopes, and on deltas. It's of no practical value since most of it occurs somewhere downhill from Flagstaff.

The next step to a nascent soil of clay and cinders is adding organic matter. Organic matter is important because it positively affects the mycorrhizae already in soil, making them more effective. Mycorrhizae are fungal middle-men or brokers, transferring nutrients from the soil to the plant's roots. The soil may be loaded with nutrients, but without mycorrhizae they aren't transferred to the roots.

Obviously, the best organic matter is decayed organic matter because the nutrients are in the decay. Also, organic matter aerates the soil as do the cinders. Organic matter turns the clay and cinders mix into what might pass for clay loam. The best kind of soil runs through the fingers. If it clots and doesn't flow, like blood in the arteries on the way to the heart, it ain't so good. Clots, clods, and clumps are signs that the nutrients aren't flowing as well as they should, a gardening mycrocardial infarction.

Composting is best done in bins and large containers, but our homesteading ancestors did it in piles, usually several paces from the cabin. In a way, the modern composting movement is a return to the past as a way of finding the future in a horticultural time warp.

Compost is the heart of the medium of soil. It's the difference between a garden that thrives and one that withers. Thriving gardens are the message of the medium, a message with a cascade of consequences, beginning with food and beauty and extending all the way to a habitable planet. 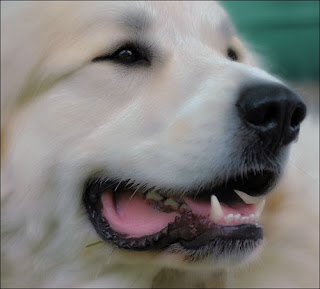 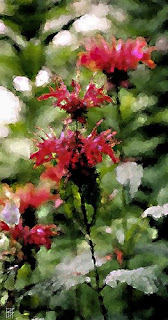 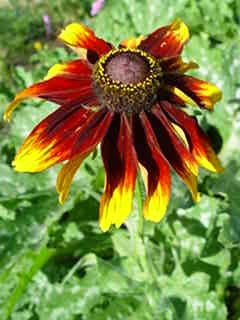 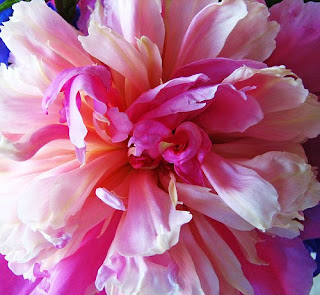 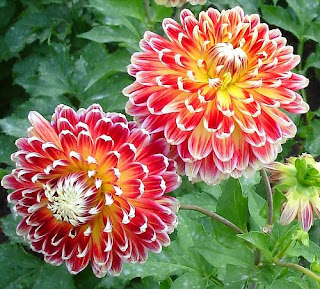 
A conversation with Pat Pedersen, a self-avowed mishmash gardener, brings to mind Proverbs 17:22, "A cheerful heart is a good medicine, but a downcast spirit dries up the bones." Pat is a good medicine, especially for those with dried up bones. She embraces life amidst all of its chaos.

She loves color, bright colors. She plants, hangs, and pots all kinds of plants that bring color into her life, resulting in a house and yard that appear a mishmash, a chaos.

Her love of color may be rooted in her father's automobile accident.
A marine veteran of Midway during World War II, he was struck down in his prime by an automobile driven by teenagers. Crippled, he lost much of his sensory awareness, depriving him of that verve so closely tied to smell, touch, taste, hearing, and sight, isolating him in a chasm of sensory oblivion and despair.

Thrust overnight into a private wilderness, in her childhood Pat became her father's caretaker. Amidst that chaos, that void, and perhaps because of it, she grew aware of her senses, particularly sight, loving colors, especially bright colors. Not only that, she came to treasure them.

Many gardeners like order, everything in its place, a place for everything, neat and tidy. Others favor systems, organizations in which everything has a function, using words like "communities" and that particularly dreadful word "interfaces."

Mishmash gardening may appear willy-nilly, even hurly-burly, with no sense at all. Not so, its meaning is elsewhere.

In his book Chaos, James Gleick writes about the first theorists of the new science of chaos, "They had an eye for pattern." "They had a taste for randomness and complexity, for jagged edges and sudden leaps." This could well be a description of Pat's garden, a garden of brightening surprises, of unpredictable delights, of beauty over classification. For those addicted to order and organization, it may offend, but beyond the offense there is a pattern of vivacity, a love of life, not merely predicable and expected, but "surprised by joy."

Chaos is a Greek word, not meaning disorder, but rather primal emptiness, a chasm, a void, an ultimate yawn. As such, it was the opposite of an orderly universe. The poet Wallace Stevens wrote, "The squirming facts exceed the squamous mind." The French existentialist Albert Camus picked up the theme and extended its consequences into Absurdité which best describes the anti-meaning of her father's tragedy.

The rational and the orderly are human attempts to fix meaning on the unpredictable and the absurd, an urban grid on a random wilderness. Those attempts aren't the reality. Life is not tidy, nor is Pat's garden. She's filled her corner of that primal emptiness with color, with peonies, dahlias, and begonias. That's been her pattern, ever since the chaos of her father's tragedy. For those who look for straight lines and perfect curves, her garden is "randomness and complexity," "jagged edges and sudden leaps" filled with color.

She says that Martha Stewart would call her garden a "bad thing," but rather than listening to Martha Stewart, she hears Frank Sinatra sing, "I did it my way." The secret to her patterns are, in her words, "Plant what you love." Her love of color even reaches to her "passion for purple potatoes."

She hopes "for her garden to become totally coherent," and as she waits, she dances with her pots and hanging baskets, looking for coherence in a world "without form and void." In other words, the pattern to her garden is a dance of color, not idée fixe but danse de joie.

Alfred North Whitehead wrote in Science and the Modern World that religion is "something which is the ultimate ideal, and the hopeless quest." So with gardening. Meanwhile, out on the edge of the wilderness in Mountainaire with her great Pyrenees, Mr. T. and Poofy B., and her companion, Tom, Pat's dances the dance of faith with her pots and planters amidst the chaos, much like Brother Lawrence practiced the presence of God in a 17th century monastic kitchen with his pots and pans. As faith and hope abide, she believes, "gardening is about love."