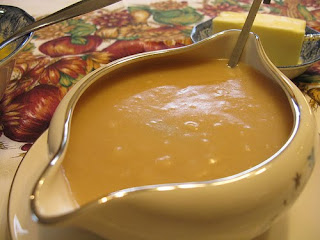 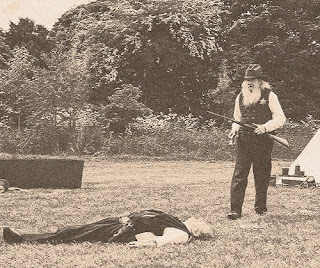 SHOOT OUT AT THANKSGIVING

Several years ago meine Überfrau and I had a shoot out at Thanksgiving over the gravy. She’d asked me to make the gravy and stuffing, writing out the steps in gravy making. I compressed a few. The gravy clotted with free-floating radical lumps. “I just knew it!” she said, “You’re always taking short cuts. You’ve just ruined the whole dinner.” A former first-class flight attendant during TWA’s days of glamour and glory, Gretchen likes things done elegantly down to place cards.

A tense time was had by all. The gathering was composed of people who ordinarily don’t sit down together for dinner. We’d invited my mother-in-law and my former wife whom my adult children had prevailed upon us to invite fearing she’d be alone. We’d also invited two couples, a veganesque Wiccan priestess who ate all the mixed nuts and her husband, a carnivorous hummingbird feeder salesman who dislocated the pot rack while gazing down my granddaughter’s bosom. The other couple was an Assyrian Orthodox husband, complete with ancient indignations and orthodoxies, and his Sephardic Jewish wife from South Yemen who was glad to be alive. A malaise underlay the gathering until dispelled by Gretchen’s magnificent feast.

Some gardens suffer the same malaise, something is going on in the garden just below the surface, resulting in a garden that doesn’t thrive. The problem’s deep in the soil. Successful gardening is soil, and soil is “what you make of it.”

The best guests for a soil dinner are those strangely-worded mycorrhizae which aren’t discreet entities like a rock, but fungal associations or symbiotic relationships between the soil’s nutrients and the plant’s roots. Growing on the tips of a plant’s roots, they’re little strands of fungi that pass from just outside the root to inside it. Spooky looking, they resemble a diaphanous spider web or that gossamered stuff used at Halloween. They can’t be seen with the naked eye, lying well below our visual radar screens.

In corporate-speak mycorrhizae are facilitators and in psycho-babble enablers. Although they can be bought, it isn’t necessary because they’re in the soil already, but to function effectively they need soil amended with organic matter, such as vintage cattle, horse, or chicken manure and compost.

As the middle men of a thriving garden, enabling and facilitating the uptake of nutrients, mutualistic mycorrhizae are the sine qua non of gardening. They improve nutrient and water uptake, root growth, and plant growth and yield. They also reduce transplant shock and drought stress.

Amending the soil with organic matter does something else. It helps save the planet, by replenishing the earth rather than consuming it and by cooling the planet through water conservation and increased foliage. Concrete, asphalt, and gravel heat it. It’s thinking globally by sustainable gardening locally. What better way to thank God at Thanksgiving than having a sumptuous feast of manure and compost for the earth!

The Sephardic woman from South Yemen and I got along swimmingly because we both spoke the same Sephardic dialect of Hebrew. She rescued the gravy, vigorously smoothing it out with a wire whisk. The stuffing turned out well. I followed the directions. “For just once in your life, why don’t you do as you’re told?” The shrinks tell us that men often marry women like their mothers.