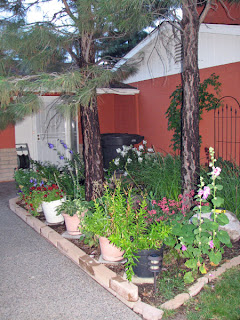 When Ed Skiba started creating his garden 37 years ago, it wasn’t ex nihilo, out of nothing. Worse, he started it from scratch which meant he had to undo that which hadn’t been done well before. He began with a dry, weedy plot of neglected dirt and detritus. The Book of Genesis (1:2) has a phrase for it: “without form and void” which in Hebrew is an eerie: “tohu wabohu.”

He began by spreading straw over the desolation and then made little clearings in which he planted his vegetables. He gradually dug the straw into the dirt giving it both form and fullness. After the straw, he planted his yard in clover to add nitrogen to the soil. He knows that soil is the heart of gardening and that dead dirt can be transformed into a living soil by adding organic matter, compost, and various natural amendments. These amendments create a home for life-giving organisms, such as mycorrhiza, enabling a plant to take up nutrients in the soil.

Ed’s garden is really a series of gardens. The front yard has a great overarching silver maple which bids welcome with its shade. Across the driveway a sunny strip of bearded irises and flowers add color to the welcome. It’s an invitation to walk around the side of the house to an expansive back yard. 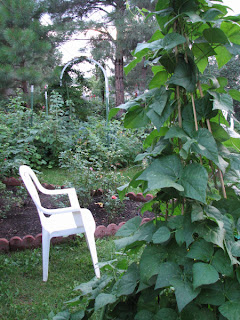 The design of his back yard is a lawn with three islands of raised beds. The lawn is a fascination because in addition to the grass, there are all manner of small plants, like topless dandelions growing in the lawn. I asked him about the lawn which is quite lovely. He replied that he is an organic gardener and doesn’t use poisons on the soil, “So I just mow them down.” If he runs across a plant that he likes, he “just mows around it.” Indeed, I saw a hollyhock happily growing incongruously in the middle of the lawn. The lawn is lush and is watered by a network of drips under the turf. It’s almost as though he believes using poison on the earth is a sacrilege.

We sat down in the shade of a cherry tree while munching tidbits from a spread of fresh fruit. He told me about the various fruit trees, such as cherries, apricots, and peaches, some of which were gifts from friends and relatives. He had even wangled an apricot from Arizona Public Service for having cut down one of his pine trees. 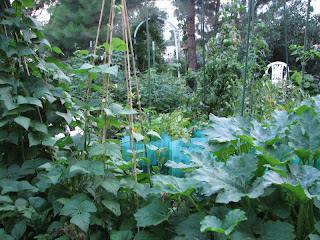 Those little clearings in the straw had grown into islands of raised beds filled with heavily composted soil, growing a variety of vegetables and flowers. Unlike many gardeners who grow their vegetables and flowers in single plots, the beds being all of a kind, Ed uses companion gardening, such as tomatoes, red peppers, beans, onions, and basil all grown together. He believes in using as much space as possible, not wanting to waste soil. The bed nearest to us was surrounded by marigolds which helps keep out unwanted insects and pests.

As we talked about gardening, he said, “I’m a believer in the little gifts from God.” Indeed, he said that sometimes he has prayed over a plant which, on reflection, I thought was a lot more likely to produce a beautiful garden than cursing the plants. As any veteran gardener knows, plants pick up vibes from the gardener. It’s called symbiosis in sophisticated circles, but the plain fact is that successful gardeners love their gardens and the plants therein, both the great and the small. We pray for those we love. 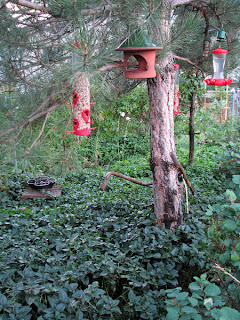 After sitting for a time under the cherry tree, he bade me follow him to another garden with chairs and a small table. It was his pine tree garden with both vinca major and vinca minor covering the ground underneath. It was a place of rest and solitude, a place to let the mind drift to places unknown or chew the rag with an old friend. As I sat there talking to Ed about his garden, it struck me that Ed has got gardening right. Un jardinier extraordinaire, he’s made a wasteland bloom.

Dana Prom Smith along with Freddi Steele edits Gardening Etcetera and can be emailed at stpauls@npgcable.com. This article appeared in the Arizona Daily Sun on 8/25/2012.


Posted by OLD GEEZER'S REPORT at 9:02 AM No comments:


YOU’VE BEEN PRE-APPROVED FOR PLATINUM GARDENING!

You've been selected for membership into the exclusive Platinum Gardeners. Pre-approval is granted only to those who’ve demonstrated a capacity to dig in the dirt, savor fresh vegetables, smell flowers, enjoy sunshine, save kitchen garbage, pray for rain, brave the wind, pick weeds, shovel manure, battle insects, and hand-squish grasshoppers. 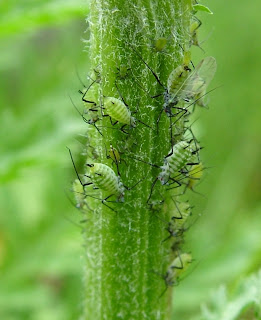 You may find yourself flaking off while in the garden. Don’t confuse flaking with aphid infestation. They’re two different phenomena. The flaking is caused by Flagstaff’s dry air. The best solution is to lather your body with an organic lotion and eat fish oil capsules. No petroleum based lotion. It increases carbon foot-prints in the garden. The lotion won’t affect the aphids, but it’ll help stop the scratching.

Don’t let the flaking deter you from treating the aphids. Sometimes, aphids reproduce in such a high volume that they form clouds, dropping their “honeydew” on cars, ruining their finishes. Honeydew is aphid offal. You can spray water at a high velocity. This seldom works, but it’ll make you feel good. If the infestation continues, spray the underside of the leaves with neem or a non-toxic insecticidal soap (an oxymoron). Aphids are a furtive lot and hang out on the underside of leaves. You will need to bend over and crouch a lot. After that quit for the day and get a massage with organic lotion.

Don’t forget the lady bugs. The horticulturally correct insist on calling them beetles, but somehow “lady beetle” doesn’t work. Ladies aren't beetles so we’ll stay with lady bug. They’re big time aphid eaters. Namesakes of the Virgin Mary, they’re sadly fickle. They can be bought at commercial nurseries and released in the garden, preferably at sundown lest they fly away. 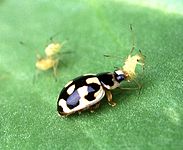 If you feel dizzy when suddenly standing up, you aren’t having a beatific vision or recovering from a hang-over. You’re suffering from a lack of oxygen which is a common affliction for gardeners. A secret well-kept by the authorities is that the air in Flagstaff is seriously short of oxygen and that they’ve done nothing to correct it by installing community oxygenators, all the while selling water for snow-making rather piping it to gardeners. Wait until the next election!

You can also exercise as a means of increasing your lungs’ capacity to reap oxygen from the air; however, the best remedy is to quit for the day.

You can snare a teenager skateboarding by your garden to pick the weeds, but such a gambit is dangerous. Teenagers’ brains haven’t developed to the point where they can distinguish weeds from plants, which statistically is about 65 years of age. They frequently pick the plants and leave the weeds. It’s difficult to cock a cellphone between the shoulder and the ear while picking weeds. Texting also inhibits weed picking.

Plants inexplicably die. Horticultural nabobs frequently diagnose these inexplicable deaths as the result of too much or too little water, too much or too little fertilizer, wrong fertilizer, wrong micro-climate, wrong plant, or ineptitude. This means that plant death is your fault so that you will feel either guilty or stupid. Consult successful gardeners and accept your losses as a learning experience. Veterans are the best tutors for combat. 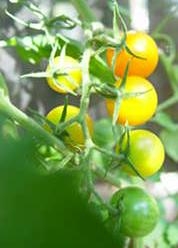 Remember the inverse ratio factor. If a plant does well without much attention, it is likely either an invasive weed or a toxic plant. Hardy plants are often dangerous because they have no concept of boundaries and will frequently invade another plant’s space, up-taking the water and nutrients. Remember, robust plants are likely megalomaniacal exotics.

Finally, sunshine is hazardous at 7,000 feet. Not only does it fade colors, it carcinogizes the skin. If you choose to garden outside in the sunshine, wear one of those goofy looking hats and long sleeves, lather yourself with organic anti-sunburn lotion, and wear long pants. In this way you can cut down on the flaking by sweating a lot.

Dana Prom Smith edits GARDENING ETCETERA along with Freddi Steele for the Arizona Daily Sun  in which this article appeared on 8/11/2012.  He emails at stpauls@npgcable.com.

Posted by OLD GEEZER'S REPORT at 11:20 AM No comments: