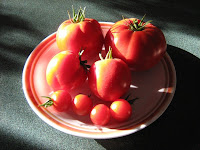 Lest the reader think the title of this essay indicates arrogance on my part, an accusation frequently found on the lips of meine Űberfrau, let me say that growing tomatoes induces the same humility as do my computer and my new television remote with 61 buttons.  I write with trepidation because I’m no authority and have had spectacular failures in growing of tomatoes along with some surprising successes.  Victims of forces beyond their control, gardens are acts of faith, not certitude.  The thermodynamic concept of dissipation seems apt since all kinds of things, such as cold spells, hail, wind, and diseases, can change a garden’s equilibrium.  In growing tomatoes, there are lots of “Why me’s?”

As a dummy amongst tomato geeks, my essay is autobiographical rather than prescriptive.  Gardening without a greenhouse, I don’t buy expensive equipment or work hard.  I start with seeds in mini-greenhouses, called pellet kits.  As for seeds, I search out tomatoes that mature in 55-65 days because of our short growing season.  Anything that matures in 80 days means that you’ll be lucky to have about eight days of fresh tomatoes.  I always plant Galina, Sasha’s Altai, Stupice, Prairie Fire, and a couple of others along with a new one.  This year the new one is Beaver Lodge Slicer, a 55 day determinate tomato developed at the Beaver Lodge Horticultural Research Station in , .


From the middle of March to the early part of April, I embed three seeds of each variety in six of the little discs of the mini-greenhouses.  I keep them moist and put the kit on a sunny windowsill.  I always plant twice as many discs as I will need because nothing ever succeeds completely.  Ted Williams once said that greatness as a batter means failing at bat only seven times out of ten. 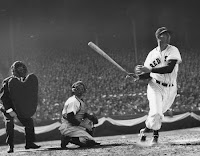 Then watching the miracle of life as the seeds sprout into seedlings, I thank God.  Thanksgiving should be twice a year, at the birth of life and the harvest.  Pity the secularists, atheists, and other spiritual flatliners with no one to thank.  Thank, like bless, is a transitive verb.

About a week after the seedlings have developed true leaves, I   transplant the strongest into bio-degradable quart pots full of planting mix.  After lightly fertilizing them with a balanced fertilizer, I keep them moist and watch them grow on various sunny windowsills throughout the house.  What a delight it is to watch growth especially in an age favoring apocalyptic doom! 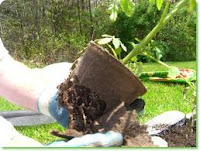 About the middle of May, it’s time to put the young plants outside.  The older I get the more I favor container gardening for tomatoes.  The reasons are elementary: control of water and nutrients and protection from various soil-borne and air-borne diseases.  Tomatoes like a rich, friable soil.  Also, the containers can be placed throughout a deck or yard so that the plants aren’t close together, protecting them from the air-borne diseases of nearby plants.  If using a container, be sure to sterilize the soil if it isn’t sterilized already by putting a clear plastic sheet over the container for ten days, letting the sun do the work. 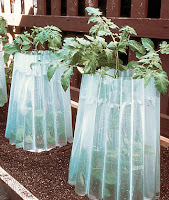 Gradually introducing the plants to the outside, I plant them in containers, where I shelter them with another mini-greenhouse, the Wall o’ Water.  When it’s safe from freezing beyond the June 15 statistical date, the Walls o’ Water can be replaced with wire cages.

Using a balanced fertilizer the first week or so, I use a low in nitrogen fertilizer afterwards so that the nutrients will go to produce more fruit rather than foliage.  Tomato plants like it damp but not wet.  Now begins the season of tomato adolescence when parents have to keep a watchful eye for bad influences such as air-borne and soil-borne diseases, cankers, wilts, curly leaves, blossom end rot, etc.   If everything goes well, along about the later part of July, all through August, and into early September, I enjoy fresh tomatoes every day, and you can, too.  By the way, my favorite is the Siberian Galina, a golden cherry of luscious flavor.

For more information check out this Master Gardening site:


Dana Prom Smith and Freddi Steele edit GARDENING ETCETERA for the Arizona Daily Sun in which this article appeared on 3/16/2013.  Smith may be emailed at stpauls@npgcable.com.  He blogs at http://highcountrygardener.blogspot.com.

The onion is the second most popular vegetable in the entire world right after the tomato, but the pity is that most gardening courses short-change the onion while an excessive amount of time is devoted to the more glamorous tomato.  The indifference toward onions may be that they grow under ground and can’t be seen save for the tops.  The same can be said for beets, turnips, carrots, and rutabaga.  They, too, are passed over in favor of lettuce, spinach, kale, and Swiss chard, but more of them later.  Right now, it’s the onion.

For starters, the onion is hardier than the tomato which will wilt at the slightest sign of adversity, such as freezes.  The onion needs daylight to thrive, not warmth, and in the first day in the year when there is enough sunlight (12-13-hours) to grow onions is March 15 or the Ides of March, the day Julius Caesar was assassinated in 44 B.C.    Statistically, June 15 is the first day when it’s safe in to leave tomatoes unattended outdoors, and even then the gardener has to watch the weather report like a hawk.  By the time it’s safe to leave a tomato plant outside, the first onions are ready to pull. 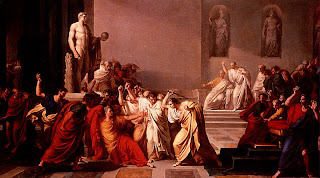 
There are two ways to grow onions, from seed or from sets which are really immature, miniature onion bulbs.  Needless to say, sets are easier than seeds but offer less variety.  The sets are best for the slothful.  I use sets.

Onions grow best in raised beds.  They like a ph level between 6 and 7.  In preparing the bed, dig in a good, balanced fertilizer (10-10-10 or 10-20-10.)  About one month after planting, it’s best to fertilize them on the side of the row with a high nitrogen fertilizer and repeat this every 3 to 4 weeks during the growing season. 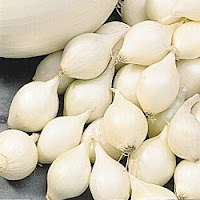 After fertilizing them, water them.  Onions crave water but don’t keep them wet and soggy.  Onions do best in a well-drained soil.  Wet tops will lead to disease.  So during the monsoon keep an eye out for blight (leaves begin to turn yellowish) and purple blotch (purple spots on leaves.)  In order to save water, it’s smart to plant the sets in a trench and in an area with good drainage and air circulation.  Our dry climate is one of the blessings of growing onions.


Sets should be planted about an inch deep and 5 inches apart.  They can be planted three inches apart if some of them are going to be used for green onions.  This way they can be plucked right along as they grow.  An onion plant is mature when the tops fall over, and then they should be pulled from the soil and be allowed to dry.  When dried, they are best stored in a cool place where they do not touch one another, such as wrapping each onion in newspaper or small paper bags.

There are three surefire varieties of sweet onion that will do well in : Superstar, Red Candy Apple, and Hybrid Candy.  There are two that are iffy but worth the risk.  The is bred more for long day zones in the north, but it can’t be beat.  Another worth the risk is the TX 1015 Supersweet which does best in the short days of the south, but as a relative of the famous Vidalia of Georgia, it, too, is worth it.

Freddy Wong at the Grand Canyon Café grows thousands of sweet onions at his spread down in , but he didn’t tell me where he gets his sets.  I get mine from Brown’s Omaha Plant Farm in (www.bopf.com.)  Remember: second is often better.

Dana Prom Smith and Freddi Steele edit GARDENING ETCETERA in the Arizona Daily Sun where this article appeared on March 2, 2013.  Smith emails at stpauls@npgcable.com and blogs at http://highcountrygardener.blogspot.com.

Posted by OLD GEEZER'S REPORT at 9:25 AM No comments: