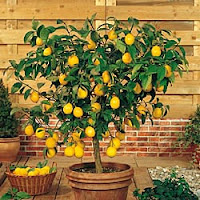 Question: My name is Fordyce P. Van Dusen. Recently, I moved to a horticulturally correct part of the state where the bent is expelling “invasive exotics.” One morning a woman with goggles, leather apron, work boots, and elbow length welder’s gloves appeared in my front yard pulling out my beautiful scotch thistles. Thunderstruck, I demanded to know what she was doing, and she replied, “What you should’ve done yourself. Pulling out invasive exotics.”

I’m a bit heterodoxical. My wife, Consuelo, calls me oppositional and anally retentive which is far better than anally explosive as is she. I want to express my individuality; however, I don’t want to give offense unnecessarily. What I’d really like to do is plant some non-native, foreign, exotic plants without bringing the wrath of the horticulturally correct down on my head. Can you help me? 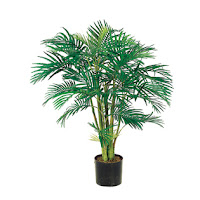 Answer: I understand your problem. First let me say that since “invasive exotics” are a scourge and plague, you must forgive the horticultural correct their Torquemadian ways. As to your problem, from my back deck I can spy two deck-bound plastic palm trees. Another fellow, Bob Kratz, keeps his inside, bringing it outside during Aurilla’s great Christmas parties. Another was potted in reaction to the efforts of a horticultural code enforcement officer from his HOA. Jim Gore wanted something unique to set him apart from the ordinary. In a previous life in Big Bear, California, he planted his whole front yard in plastic flowers. He is a person of considerable accomplishment, a stevedore, a ski instructor, a biker, a car nut, and a contractor. His potted plastic palm works for him, and it might for you.

Question: No! I don’t want to shilly-shally around with plastic plants. I want to make a statement with something that’s alive.

Answer: I’ve an answer for you. A friend of mine, Alex Martinez, was born and raised in Tucson and misses his citrus trees. He, too, is a considerable person, a naval officer and school superintendent. So he developed a moveable citrus grove in his house using dwarf varieties placed strategically in sunny niches. He has several citrus trees, as well as two figs. He moves them outside when the weather is temperate and brings them back inside when it’s cold. Now, he’s investigating the feasibility of establishing a citrus grove on an island in the Bering Sea. He’s an indefatigable, type-A, personality, pushing boundaries.

The citrus trees are exotic, but not invasive. Unlike exotic invasives, if left to themselves, citrus trees will perish in our climate. Invasives thrive with neglect as weed warriors know.

Answer: First, you must have sunny niches in your house as well as your wife’s permission, a chancy affair. Then, you can buy dwarf varieties from commercial nurseries only in Arizona which has rigid laws forbidding the importation of citrus trees. 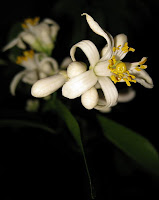 Meine Űberfrau was so impressed with Alex Martinez’s moveable citrus grove that she gave me a dwarf Meyer lemon for my birthday. Originally from China, it’s probably a cross between a mandarin orange and a lemon. We have it in the dining room next to a sliding glass door near her geraniums. I have plans for a Satsuma mandarin orange in a sun-splashed bathtub in the upstairs bathroom next to her Boston fern and a tangerine in the front window. She suggested I should exercise self-control and moderation. Next an avocado.

When growing citrous exotics in containers, specific care is required. First, the soil should be slightly sandy and acidic, moist but not wet. They should be watered 2 or 3 times a week and everyday in the summer but never left in standing water. The ideal temperature is about 77°F. but not lower than 55°F. lest they go dormant. Heavy nitrogen feeders, they need a slow release, organic fertilizer with a ratio of 2-1-1- or 3-1-1. Their blossoms effuse elegant aromas. 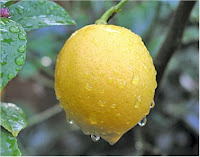 The Spanish say, “Living well is the best revenge.” Yours could be giving freshly-picked, plump, juicy, non-invasive, exotic, home-grown Meyer lemons to the horticulturally correct during a winter’s blizzard. That is, if you care to share them.

This article appearaed in the Arizona Daily Sun 6/9/2012.