When deciding on my doctoral program at the University of Chicago, I first thought of the poetry of the Old Testament. Of all the languages I’d learned, Hebrew was my favorite, relatively simple grammar with a small vocabulary. However, I also needed Ugaritic, the language of the Canaanites.

So I went to the third floor of the Oriental Institute, a great gloomy gothic pile of grey granite stones, to meet the Ugaritic professor, a dusty gnome-like creature hovering in the corner of a large room filled with tables covered with clay tablets. He said that his Ugaritic classes were at 6:30 in the morning four days a week, meaning a 4:30 rise for me. I asked how I might learn it on my own. He replied that the entire Ugaritic language was on the tables in the room and that he was compiling the dictionary. The only grammar was written in German and published in Cairo. He offered me an Urgaritic tablet. He said: “You have it upside down.” I thanked him and left and studied literature and theology. 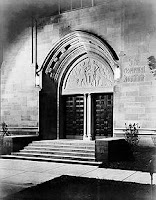 Written language was first developed for commercial use. At the confluence of the Tigris and Euphrates Rivers, Sumer was on the Silk Road, a commercial center trading goods from Kathmandu to Istabul. The trading was so active that symbols were developed to keep track of the commerce. Symbols or words for “three” “bags,” and “barley” were written down on clay tablets.

A subtle shift took place in the human mind. The merchant no longer needed three bags of barley to think about trading them for silk and pearls. All he needed were clay tablets impressed with abstract symbols. Thus began the human journey into what would become “virtual reality,” an odd way of saying “simulated reality” which makes it no reality at all. It is an experience entirely with oneself, a kind of psychic solipsism, a world of pixels and particles.

As time passed, written words were no longer connected to living things, such as plants, animals, and people. Today, our lives are almost entirely spent in the abstract, dealing not with the living but with human artifices and dead ones at that.

As a boy, I body surfed and played in the rain. Watching the sky at night, encased in a mummy bag, while backpacking in the High Sierra, I felt enfolded by the stunning beauty of the sky. The sky at 12,000 feet is immediate. Even in the Army tracking criminals and saboteurs in the Alaskan wilderness, I felt at one with the wild until I let my guard down once and someone tried to slit my throat while I was surveiling a military site. Thin-faced, his front teeth were steel.

Now, it’s gardening, running my hands through the soil, tending to seeds coming to life, caressing the leaves, pruning and shaping the living, and feeling the slap of branches. It’s smelling, seeing, touching, hearing, and tasting life.

Our solidarity with nature is rooted in the belief that God formed us from the dust of the earth (Gen. 2:7) through the process of evolution. When a young man, my physician, peering at me over his half-glasses, said with a quizzical smile, “It doesn’t matter how much you know, you’re still 99% animal.” We have developed what Timothy Egan calls: “a nature-deficit disorder.” “Millions of people have decoupled themselves from nature.”

Gardening is a going home, coupling once again with our origins. In 1929 Walter Lippman wrote an essay entitled, “The Acids of Modernity.” That title could be applied to the present. The more alienated we become from the earth, the more spiritually acidic we become as though we’ve lost our identity, orphans searching for our lost parents. We speak today of rootedness. There is no better place to set down our roots than in the earth and with what it produces.

After the soil was turned for the White House Kitchen Garden, Michelle Obama said, “Let’s plant.”

Dana Prom Smith, editor of GARDENING ETCETERA, can be emailed at stpauls@npgcable.com.  This article appeared in the April 21, 2012, edition of the Arizona Daily Sun.