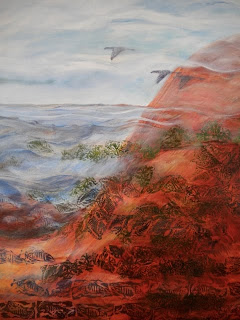 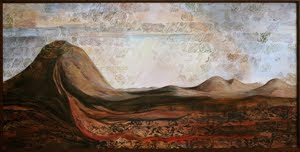 A LIFE OF EXPLORATION

Rachel Wilson’s life as an artist has been a life of exploration, at first glance an exploration of the external world through paintings that are out-there at arm’s length, perhaps a landscape. Actually, she was exploring the farthest reaches of inner space, especially transformations of the soul’s inner reaches. Modern art does not pretend to represent a static, external world of convention but rather the chaos of those inner worlds by means of the splintered and distorted forms of conventional reality.

As an explorer, she ventures out without a clear picture of where she’s going. She doesn’t envision the completed work in her mind’s eye, merely the beginning point, her work always being a work in progress, an act of faith. As with Abraham of old, who “went out, not knowing where he was to go,” the Muse leads her into the terra incognita of inner space.

In an odd way this sense of exploration is her history. She began as a girl who was good at drawing horses. Coming from a family of academics, she tried graduate school three times, always falling back to her beginning point as a little girl who loved to draw horses, so she started where she began, becoming a painter.

As Rachel looked out a window in her home in Doney Park near Cosnino Road, she said, “The view has changed. The bark beetles killed off the taller piñon, and all we have left now are the junipers. We can see farther, but we can see less. No longer the beauty of the piñon’s green, but now the empty beauty of the sky’s endless blue.” With her view transformed, she has been transformed. 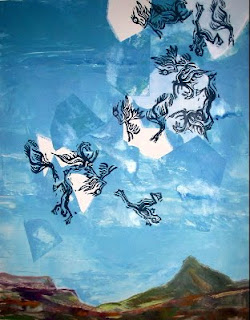 Rachel loves the landscapes of the southwest. One of her paintings of the grasslands, actually steppes, a few miles down the road from her house, she has filled the landscape with the transformations of history. Images of petroglyphs, Texaco and Mobil signs, float through the painting and line the bottom and middle as though these civilizations have passed through the land, but in passing through they changed the land and were changed by it. 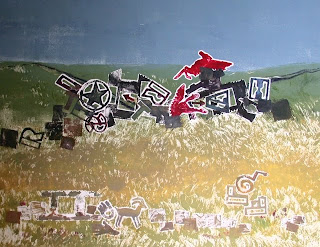 In addition to being a painter, Rachel is also a Master Gardener. Her garden, as would any garden in the outer reaches of Doney Park, is a work in progress, an act of faith. It wanders amongst the surviving junipers: no fixed beds, occasional trails amongst native and adaptable plants. Gardening in Doney Park is an exploration, finding out what works and what doesn’t in a soil of volcanic cinders with cold winds sweeping off the San Francisco Peaks and high water prices.

Her garden seems to start wherever one is standing at the moment, never appearing the same again. She waters her plants beneath the surface of the soil, so her garden is devoid of irrigating contraptions while avoiding surface evaporation. Now that it’s legal, she and her husband, Stephen, a mathematics professor at NAU, plan to use both captured water and gray water. As befitting a gardener, Rachel is a woman of the soil, the water, the wind, and the fire, and this identification is seen in her paintings which are often at the intersection of nature and history.

Her aptly named Somewhen Studio sits amidst her garden’s trails where she paints what Edvard Munch called “The study of the soul.” She and her paintings can be visited at www.somewhenstudio.com.