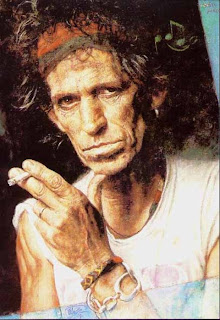 Keith Richards of the Rolling Stones in his addict’s journal, Life, writes: “Image is like a long shadow. Even when the sun goes down you can see it. I think some of it is that there is so much pressure to be that person that you become it, maybe, to a certain point more than you can bear. It’s impossible not to end up being a parody of what you thought you were.”

Highly intelligent and widely-read, Richards alludes to T.S. Eliot’s Hollow Men: “Between the emotion / And the response / Falls the shadow.” “This is the way the world ends / Not with a bang but a whimper.”

Of course, both Richards and Eliot drew their inspiration from Shakespeare’s Macbeth on hearing of Lady Macbeth’s suicide, “Life’s but a walking shadow.” The theme continues through Plato’s Allegory of the Cave to Genesis’s imago dei in which human beings are created as shadows of God, “image” in Hebrew meaning “shadow,” a form without substance.

As with Richards and Macbeth, we’re often burdened with what “we should’ve been,” “what someone else wanted us to be,” and “what we’d hoped to be,” “what we could’ve been,” but never were, so on in finitum. Its Eliot’s “striding shadows” unaware of whom they are.

Anxiously free-floating is difficult while letting rich soil run through our fingers, listening to the wind whistle through the pines, smelling a flower’s fragrance, or eating a warm tomato just off the vine. The senses reassure us by connecting us to our origins in the earth. Our five senses allow us to forsake the shadowed world of images, paying attention to those sensations at our finger tips. Gardening is the working of both muscles and senses.

The first connection is making compost. We can’t take our pretensions seriously when mucking around with compost, horse manure, coffee grounds, and kitchen scraps. The shadows take flight when turning a pitch fork in that moldering mélange, especially as the warmth and earthy aroma rise from that gardener’s stew. Composting is not a time for shadows and images. It’s a time to save our souls.

The next step in soul-saving is turning the decomposed mélange into the soil. Most of us spend our time in despoiling the earth, but improving the soil is one sure way we can improve the earth by enriching its fertility. Shoveling manure and compost into the soil takes us beyond our shadows, riveting us on the immediate.

Once the soil is ready with manure and compost, another way to move beyond Richards’ “long shadow” of self-parody is to plant seeds and wait around for them to sprout. What first appears is seldom what it will be fully grown, but all the while it is growing, it is growing into what it is, not what it should be. A seedling is always faithful to itself which is what Richards doubts about himself. Seedlings are good tutors to living.

Then comes caring. Lots of people don’t give a damn about the world around them so focused are they on themselves, settling old scores, rectifying old grievances, justifying old wrongs. Gardening pulls us out of that inner turmoil and centers us on the welfare of the plants. Our worth is tested by those things about which we care. While gardening doesn’t match loving someone else, it hints at the rewards of leaving our self-interest and caring for something or someone immediate, like the up close and personal.

Caring means tending to, such as watering, fertilizing, grooming, and picking weeds which are the pimples, warts, and blackheads of gardening. A gardener has to play attention to whether a plant’s wilt is from disease or lack of water, to yellowing and curling of leaves, to little nasties lurking under the leaves, and all manner of predators, flying, crawling, and slinking. They all require an outward focus.

Finally, there are the rewards which encompass the classical Greek virtues of truth, beauty, and goodness, the truth of the soil, the beauty of the flora, and the goodness of the fruits of the earth. Perhaps, Richards should take up gardening.

Keith is actually quite a devoted gardener, as it turns out - he brought Jimmy Kimmel a gift form his garden though I can;'t recall what it was - look for the interview video