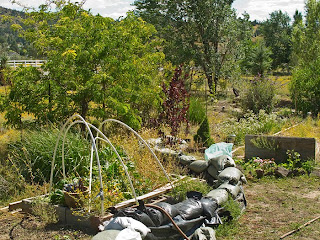 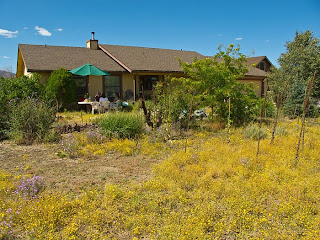 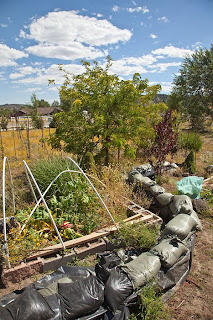 Heather Bostian’s garden in Doney Park is showing signs of renewal after the devastating floods following the Schulz Fire last summer. As Heather said, “New wildflowers I’ve never seen before are growing in the front yard. They must’ve been washed down from the Peaks.” In a way, her garden is a metaphor for her life as a healer which began in Ann Arbor, Michigan, where her father was a psychiatrist.

However, the real genesis of her garden began at San Francisco’s American Conservatory Theatre where she earned a Master of Fine Arts in acting as well as a M.A. in theatre arts from San Francisco State University. Her garden is theatre; theatre is the sense of Aristotle’s theory of drama as catharsis or cleansing from pity and fear. Heather’s abides herself as a healer, giving people the power to cleanse themselves of pity for their circumstances in life as well as a fear that their pasts will keep repeating their grip in their future.

Save for her house, her entire property was flooded and is covered with several inches of dried mud, caked hard and cracked. It appears inhospitable, and yet from its deathly gray surface between the cracks new life is emerging. For Heather it is a metaphor for her life’s work, new life emerging from destructive set-in-concrete patterns of the past. Ironically, that caked mud contains not only new seeds but also fresh nutrients, once e-coli have expired.

The basic structure of her garden has remained the same, the trees and shrubs. A thicket of Colorado blue spruce, elm, piñon, and elderberry reach out from the side of her house forming a wind break which along with the house itself protects the front yard garden from Doney Park’s winds. Behind the windbreak is another garden with a bird sanctuary, grape vines, and a cactus garden. In the midst of the windbreak is the remnant of a waterfall and pool which the flood damaged beyond repair as though there are some sorrows which are irreparable and are best quarantined, or as Jesus said, “leave the dead to bury their own dead.”

Heather’s understanding of both gardening and therapy is as an integrating coalescence in which all the elements are a part of a pattern. For instance, her plantings are either edible or medicinal or both with such plants as sage, garlic, wild lettuce, kale, red cabbage, and elderberries. At first glance, her garden appears random, especially after the flood, because there are no neatly defined beds. After a long look at ease, a pattern appears: the back half of the garden is for those plants that can survive without much help, but the front part of the garden is for healing and nutritious elements. She plants them where they seem to do best, not where they ought to be planted by grid.

Simply put, therapy is often a liberation from the trammels of the past, those imprints, grudges, tragedies, and slights that hold people back from a renewal of their lives. Since we often embed these psychic blights in our flesh with a stiff neck, an aching back, a headache, knotted hearts into knotted flesh, Heather fuses her therapy with massage and hypnotherapy, touching both the flesh and the secret self, the soul.

Therapy is not only a liberation from the lockups of the past, it’s also a leading out into the light of the new. The word “education” comes from the Latin, ēdūcĕre which means to draw out or lead out. Even with its devastation Heather is planning to transform the ugly sandbagged berms surrounding her house into lovely, meandering planters for her medicinals and edibles.

A metaphor for renewal in which life is neither a squirrel cage, repeating the same old things, nor a slinky with slow improvements over the years, her garden is a journey, transforming the old into the new. While sitting on a patio still encrusted with debris, one can see the old reliables in the yard, still abiding. Also, in the cracked and hardened mud a new and surprising life grows out of the calamity with new shapes and forms never thought of before. What a metaphor for life!
Copyright © Dana Prom Smith 2010
Posted by OLD GEEZER'S REPORT at 8:51 AM