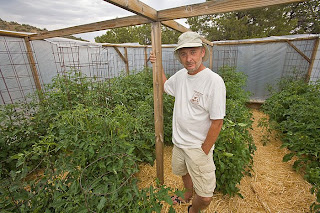 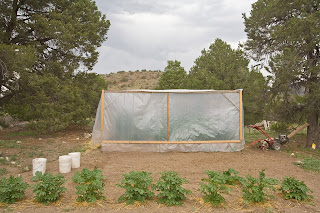 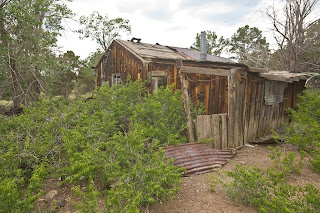 A GLEAM IN HIS EYE

"A gleam in my eye" is the way Virgil Frye describes his feelings when in late February and early March, he starts planting his tomato seeds. In his mind's eye, he sees them maturing through spring and early summer, and then later in the summer he sees himself savoring their luscious fruit. His relationship with his garden is not mechanical and distant, but immediate and simpatico. His garden is family.

A longtime widower whose grief is near spent, traces remain, a catch in his throat, misted, down cast eyes, but, happily, he's soon to wed again. Something of a recluse, living near the edge of nowhere on the outskirts of Winona, he's fashioned a place of peace for himself on a slope of land in a forest of junipers at the end of the road. For him gardening's a solitary sport. "Group gardens, like communes, fail because some people work hard but most don't." He believes in self-reliance.

At the entrance to his land are the ruins of the original settlers' cabin, the place they chose because the Ancient Ones had chosen it before them. Occasionally, he finds shards of the Ancients Ones' presence. His place has an aura of history. Virgil believes that present-day inhabitants of the Colorado Plateau would do well to follow the Anasazi in the way they use the land. "We like to think we're just too smart," he says, "and sometimes we pay for it."

Authenticity is his watchword. He didn't haul in dirt to make his garden. He cleared the land of rocks and added organic matter to make the soil. Then he built a walled enclosure of plastic sheeting with a roof he can cut way when the danger of frost is past. Next, he covered the soil with straw which he keeps damp, "a tomato swamp cooler."

He begins his tomatoes from seed because, "boughten tomato plants" are strangers, not family. Using pint-sized containers, he covers the seeds with a few inches of soil, and when the plant emerges, becoming a few inches high, he adds more soil to develop the root system. "I grow root systems not stems." He's committed to what the eye doesn't see, rich, deep soil and roots.

A son of the soil himself, he grew up on a farm in northwest Iowa. A self-confessed vagabond, he settled for a time in Oregon but migrated to Arizona to get away from the wet and rain. One senses he's found a home on that slope once farmed by the Ancient Ones.

As always, the proof is in the pudding. His tomatoes are
spectacular. It's like an alternate reality, once a person steps over the threshold into his large plastic enclosures. Row upon row of tomatoes, some shoulder high, laden with fruit, some as big as baseballs, all in the middle of July. He fusses over his tomatoes as though they were his children. "I want to see my tomatoes progress, rather than just staying alive."

Virgil plants by the moon and credits it with his bumper crop of tomatoes, but he also carefully composts his soil, using only a little synthetic fertilizer at the beginning of the growing season to give his tomatoes a "jump start."

Once a visitor has recovered from the shock of stepping into his first plastic enshrouded tomato Eden, Virgil opens up a second, similar in structure, identical in horticultural opulence, hidden down slope behind some junipers. When asked if he planned to sell his tomatoes, Virgil, stunned in quizzical disbelief as though he had just heard an unspeakable sacrilege, finally replied, "You don't sell your children. This is food, not some old washtub. It's too important for money."

He gives much of it away, but he also cans his own tomato juice and tomato sauce, keeping some of his family around him during winter's cold fury.

Virgil won the "Special Interest" award in the contest of gardens by
the Arizona Native Plant Society and the Flagstaff Xeriscape Council. A tour of all the gardens is from 10:00 am to 2:00 pm, Sunday, July 26. A map is available on line at www.thearb.org.

Photographs courtesy of Tom Bean
Posted by OLD GEEZER'S REPORT at 9:52 AM